I have not been using the full enclosure the past 2 months because I've been using PLA and have had to meticulously watch the start of the print to make sure the initial layers were fine because I was experiencing a lot of failed prints due to underextrusion.

I'm not sure I understand what you mean by separation for the board? Are you asking if I raised the printer up to provide additional air to reach the electronics under the printer?  If so yes, I have sound dampening feet attached to the printer that raises it by 1.5-2 inches.

I already disassembled the hotend, but I stupidly did not do an atomic pull before disassembly, so there is a ton of PLA in the barrel, so the hotend coupler is stuck to it...  I am going to reassemble it and try to clear it out.

I took some pics of one of the atomic pulls.  I've done lots of them, but this was the last one I did, but the features are fairly consistent with how the other atomic pulls looked as well.  If you notice, one side of the pulled filament looks fine, smooth no burnt material and looks as if it perfectly mimics the internal aspect of the nozzle.

However, the other side has a gash/groove in it.  Maybe this groove is caused by some lodged material.  This groove is present in every atomic pull I have done.  One thing I noticed was when I cleaned my gnarled bolt was that it looked like there were thin metal pieces attached to the filament... Not sure where those pieces came from, but I cleaned them off and cleaned out the bowden before printing again.  Hopefully that is not in the nozzle.

Both pics are of same atomic pull.

This side looks fine. This side has a gash/groove in it. (this groove has been in every atomic pull) Anyhow. I would check the upper part of the stomic pull to see if it has a groove, because it could show if the coupler was deformed, had a gap or stuff like that.

As for a good reference of how to attach the umo head check this image made by @gudo, since thr manual doesn't show properly how the structure internally looks.

I put this because most of the time I see a UMO user with problems is mostly because their barrel is not properly aligned or they tighten the x4 screws too much flattening the ptfe coupler too much (that shorts the life span pretty quickly since the tip deforms).

Also i must say that I broke in many different ways the umo head because lack of information. For example UM never did a good assembly guide of the head. Also, a good idea from @amedee is to add shims between the aluminum peek holder and the upper wood frame, that allows for a very good assembly without the issue of damaging the ptfe coupler, and also makes the whole head truly aligned and doesn't tilt. Maybe he can share a photo of his hotend, he has a perfectly ok setup. I can't since I changed all my 3 umo+ to um2+ heads.

I cooled the UMO nozzle to 90 degrees before pulling.  I can try it again at a lower temp once I set it up again.  As for the groove, there is no groove for 2-3 mm on the way around once you get past the groove at the tip. However, after 2-3 mm there is a groove on both sides, but I'm not sure if that's an artifact from the stretching if the nozzle temp was 5C too high.

As for the assembly, I never put much thought into it.  I typically hand screwed the barrel and nozzle on until it got tight, then I would gently use a wrench to tighten it more.  I never used shims in the print head, but I've also never seen anyone else do this, yet many seem to be doing fine without them?  I'm open to try them and will send amedee a message to see if he has a picture.

Would you recommend I switch to a different hotend given I've had problems with my UMO since day 1 and after replacing it with new offical hotend?

If so, what hotend would you recommend?

This is an old picture, but you can see the shims between the metal and the wooden plates. 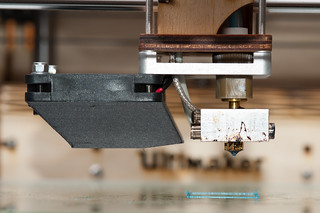 Without shims, you typically have some clearance near the PEEK and tightening on the other side makes that the plates are not level anymore, so it forces on the PEEK.

Properly mounted, as long as you do not print hot (<240°C), the stock UMO hot-end is perfect -- just need a coupler from time to time.

For me, the trigger for changing the coupler is when it starts to be difficult to do a cold pull at 90°C (with PLA).

There is also something you need to take care during assembly. The manual says you need to push the Bowden before tightening the screws. The reason for this is that the Bowden will be flush with the coupler and gently push on it. Now if you do this when the screws are still too loose, you will generate too much pressure on the coupler and it will deform rapidly...

I will try this, but my coupler at least the top portion (I cant view bottom until I reassembly and clear out the PLA that has it stuck to the barrel) does not look deformed after disassembly.

If the coupler is fine, what else could be causing my underextrusion and clogging?

I never had clogging on my UMOs, so there must be something basically wrong.

I bought my printer used. Maybe that's the issue, but I've continued to have issues even after completely replacing the hotend with all official parts.

I'm going to try the shims, soak the nozzle in acetone, and install a new PTFE bowden tube. If that doesn't work I'm just going to buy a Prusa i3 MK2.