I'd like to get 2 sets of 8, and get in on the group US shipping if possible. Also sending a PM to foehnsturm in addition to posting here.

Welcome to the non-lurker side of the fence, Jeff. We're pretty friendly over here... I think you'll do fine :-)

I'd like to get 2 sets of 8, and get in on the group US shipping if possible. Also sending a PM to foehnsturm in addition to posting here.

It is still May 6th where I am at. Does that count?

If so put me down for a set of ten with the shipment to the US.

If it's not too late, I'd love a set of 12. I'm in the UK, so shipping should be easy enough. If you PM me with your PayPal address I'll sort out the cash and my address.

Curses - only just found this thread, too.

As above. If it isn't too late, I'd also like a set of 12x8mm. Shipping will be murder to Australia, but I'm used to that. Let me know if it's still possible and I'll do the PayPal and address.

this were the last 12 pulleys I had.

There is at least one other order from Australia. So we might arrange a combined shipping, as Joergen does for USA.

The entire production lot is sold out now.

If there is sufficient demand I will naturally organize a second production run.

Is there that much clearance between the pulley and shaft that this makes any difference? If it does, then surely by alligning the grubscrews so that they are 180 deg from each other, any errors caused by one should be countered by the other?

This was discussed earlier in the thread, if you align them it helps in one way because at least both pulleys

are trying to do the same thing at once...however, that does not do anything to fix the speed variation.

The clearances that were measured are also discussed earlier in the thread, and are not insignifcant.

By aligning them it just means you have effectively two variable diameter pulleys, varying at the same time. So they are not fighting eachother, but this does not remove the actual speed variation !

Also I think the toothform on the standard ones is not well machined.

I expect to see a really good improvement from these bits.

Some people are already asking where and when to send the money, I like that ...

However, I will send messages with payment details (Paypal preferred) together with a comercial invoice within the next week when I'm certain about the delivery date.

Everyone who ordered: Please report back! I'm certainly interested in this, and would really like to hear from someone if it really improves things

Dijan: Markus is doing this probably as a one-time-deal, you should ask him first if/when he is offering this again before skipping this initial order.

Joergen: I understand that that's a possibility, though if I understood things correctly he is already out. What I was interested in was knowing whether these parts make any difference: If they do, either he or someone else will probably take up the slack. Thanks for your concern though

there are three people who showed heavy interest but didn't get in touch so far: yourself, fluxline and MSURunner. You are still in my calculation but there are already guys who subscribed for a second batch as well. So either way it's fine. I just have to know.

Oh, are you holding a set for me? Sorry for not being more explicit :oops:. I am still interested in this, but when a lot of people showed interest I thought I could wait for them to report back. give them to someone who is already waiting for the next batch!

I'm interested in a full set of 10 whenever they are available.

Foehnsturm: I think I missed my deadline for ordering under the school budget :/ I'll have to get in on the second batch if available, so if you bulked an order with me in, looks like Rob can have my spot.

Good news, production is finished, I will pick up the pulleys this Thursday, grub screws should arrive today.

Just in case if my set of 10 offer was too suggestive:

Anyone who ordered 8x8mm but actually needs 10x8mm please leave me a message. Production yield will be a little higher than ordered.

I will send messages with payment details at the end of the week.

I still have time to create one order?

Oh my god, I am a week behind! is it too late to order a full set? I am from Australia. Thanks.

This weekend my kids will have the opportunity to make some extra pocket money. 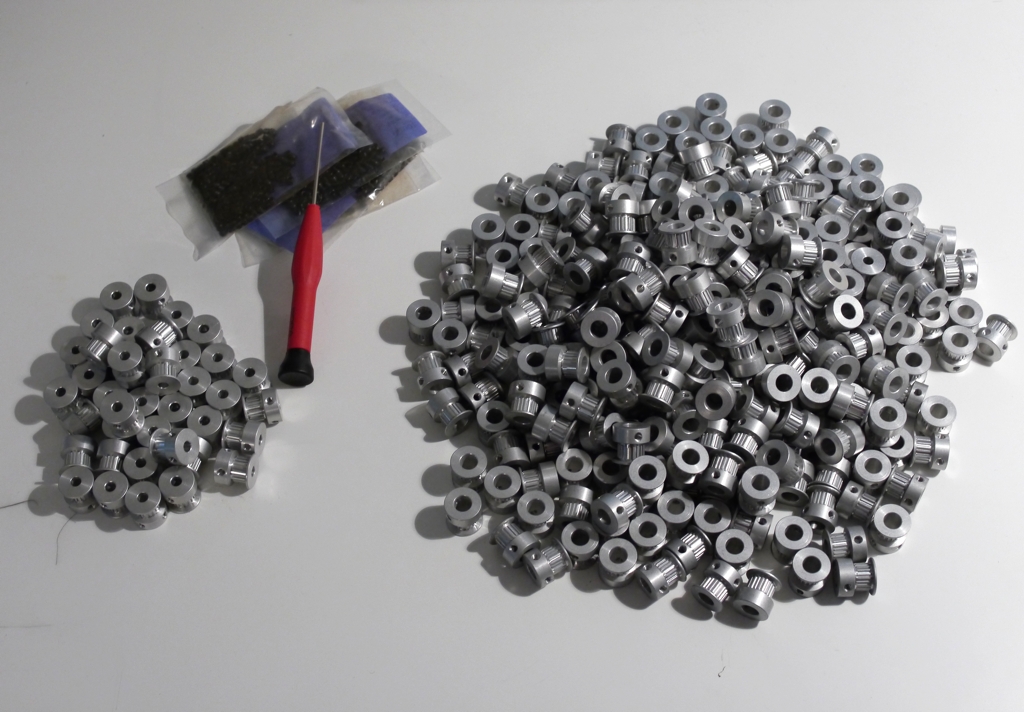 Looks good so far, I'll send a message next week.

Ok, I am waitting.

I am waitting too.

He said he'd send out messages "next week", it's only Sunday, be patient.

Marcus is preparing the shipment to the US (thank you).

if you are on the US group order, please PM me your shipping address, and send me $5 for the USPS flatrate shipping via paypal. I assume if marcus ships it this week, it's next week in NYC, and then almost at your address.