I skimmed thru the thread on this...what's the current cost and whom should I contact about purchasing some, when available

did you get all details from those who ordered?

If not, people hurry up - please

I see a lot of posts about buying these pullies but how about fixing pulley inaccuracy?? Do you really get (much) better results with the new pullies? And does somebody have some before and after photo's?

I also would like to have a pack of the pulleys next time you order, see also my PM. Shipping might be easy, since I live only 50 miles away from Munich :-)

Please let me know when you order the next shipset!

Thanks and Regards from Augsburg,

I've got the pulleys today and will install them tomorrow. Many thanks to Markus for the quick delivery!

Any tips about the quality of the set screws? I have other set screws here (DIN913 high-grade steel A2) and wonder which are better interms of "not becoming round when excessive force is used..."

Hey Markus maybe something wrong with PM but I still have no any payment details :(

as I posted two weeks ago, everything is ready but I need the shipping address for calculating shipping costs and tax.

You are not the only one ;-) one half of the orders is still waiting for shipping for that reason.

I received the pulley yesterday. I'll mount them this weekend with the dual extrusion kit.

I'm just surprised, I thunk that the pulley were fixe with 4 screws for a good centrage. But they are only 2.

Received them last week, and without having to pay taxes.

Prints are running smoother and more silent, so i am happy with the result.

Only Z-Axis artifacts are visible, so that will be next.

@MakingZone. It was always 2 screws. I checked the whole thread but it was never mentioned that there would be more than 2.

Actually, I currently use only one screw. Due to the 8H7 bore there is virtually no play.

Happy to hear that.

My z-axis coupler had horrible bore holes as well (about 0.2 mm to wide). Impossible to fasten without massive wobbling.

How did you solve your z-axis coupler problems? I broke a bit while trying to fasten mine and now I fasten it with only one screw... No wonder I have so many http://umforum.ultimaker.com/index.php?/topic/2716-cannot-lower-bed-to-reach-endstop/.

I have an issue with the belts (presumably) rubbing against the new pulleys. I have created a new thread:

I have a Sieg C4 lathe on the way.

Making a z-coupler with a better fit will be the first task.

I have sent you a message, I would like to order these advanced pulleys as well! :-P

@all who asked for pulleys after the deadline

There are still 5 original orders lacking response to my messages.

A few days after the Ultimaker 2 release hype, I will give out all remaining sets to you - first come, first serve.

I would appreciate if you could consider me in your list

Thank you in advance

Thank you foehnsturm for the very fast delivery. I received the pulleys just one or two days after I paid. They are here for a while and I haven't installed them until now - want to do this with the direct drive modification.

I should reactivate the UM anyway. Unfortunately he'd a long time pause.

I mounted the new pulley this week, and I'm very happy... The precision in X and Y is better, but the precision in Z look a bit less... We can see differents layer easily, and specially each 6-7mm... Se picture above. If you have any idea...

It's not only the pulleys that are off - the rods are even worse!!.. Actually, when I put them up in my lathe they were as much as 0.3-0.4 off in the center. This affects the smothe movement a lot!

When I mounted my UM I would expect a very smoth movement of the printer head but how I tried I could not get the thing to go smothe. So.. I started looking and found this thread.. So, looking at my pulleys I could se them vobble.. They were indead of by a total of 0.2 as the axis are not 8 but 7.9 mm.

However, realizing I would not be able to fix the pullyes I decided to go ahead an use them anyway and then build a new machine later, with other components. I remounted the things and stumbled accross the next thing. Moving the printer head in one direction (steppers decoupled) I saw that the sliding blocks of the opposite direction moved up and down... Dissassemble again and measuring... The axis are crap.. They are not not completely round and the are definitely not streight !!!..

Pitty with crappy material for such a nice concept. I do like the way it has been designed.. althogh there are many improvements to make.

So, what next. Well I took out the axis from the UM put them up in my lathe and tried to streighten them out.. I managed to improve them a bit but not all the way. Finally I will order new axis.

Markus you are DA MAN! Thank you!!! 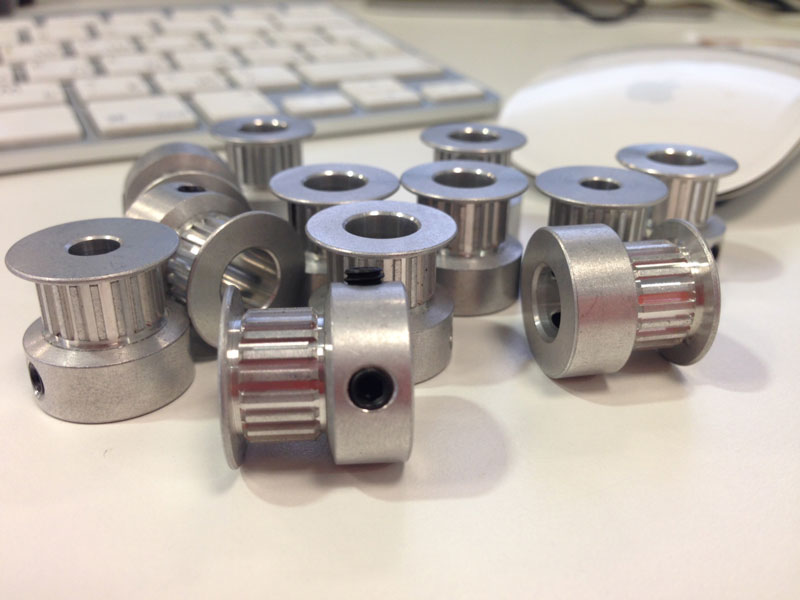