This is a complicated subject.  I would have to type for 4 hours to answer your questions properly.  Can you pick just one thing please?  The thing that is the largest problem for you personally.  If you could only fix one of these issues this week and if you could narrow it down to something that is very subjective e.g. "the part is wider at the bottom then further up yet the model has vertical walls - as seen in this photo - I care most about the bottom layer though".  Then I can help you out.

The AA 0.4 profile with 0.15 layers for Tough PLA is probably the best starting profile but there are so many profiles I don't know which ones I've tested.  But this is probably the most tested and best one to start with.

I used the file from this post, answer 6 from user LaserBrain.

my problem no 1 is the "melting" at the lowest layers

Problem no 2 is the bad quality, when I have a vertical wall this should be vertical and not something poor like on the photo. (in the photo the item is with bottom up) That the item on the button is a little bit wider, this is called "Elephant foot" and can easily fixed with the setting "Initial layer horizontal expansion" set it to a negative value - start with -0.2 or -0.3 and check again. It will also depend on the layer height you use. The first layer is printed with higher temperature and higher layer height, to have a good adhesio to the bed and that's causing the plastic to squeeze out a little bit.

If the the accuracy is general not correct, over the whole object in X/Y directions, you can do the same with the setting "horizontal expansion" just for every layer not only the first one.

today I had time to try this suggestions.

first 1 changed the printing head with the second one which was delivered.

printing was not better, so I can impose the print head. Also other Filament did not made better printings. (pic ..1+3)

in my opinion the elefant foot is a stupid option. I assume  near to 100% of the users want a print as exact as the stl file.

I am really dissapointed with my S5. I do have a chinese prusa at home which made better prints out of the box. (pic 2)

It can´t be true that the sample print in the delivery box was made with this machine.

could there be a mechanical problem ? the belt at the back side looks a little loose (pic 4 ) the upper side of the belt is good but the lower side is more loose than the other three belts. If the belt is too loose, you can quickly fix it - here is more info about it and also a video how to do it:

Regarding print quality, I think you do something wrong with the settings. Maybe too hot or too fast. If you provide some more infos about the settings you use, we can look into this issue and give some advises.

But also keep in mind, that a FDM printer is not as accurate as a CNC machine and you will never get 100% perfect results without any post processing (sanding etc.) If dimension accuracy is your absolutely priority 1, then print really really slow, set all speeds to the same value, turn off acceleration on jerk control and use a small layer height. Also printing as cool as possible could help.

I know that fdm has its limits but this are very poor prints. 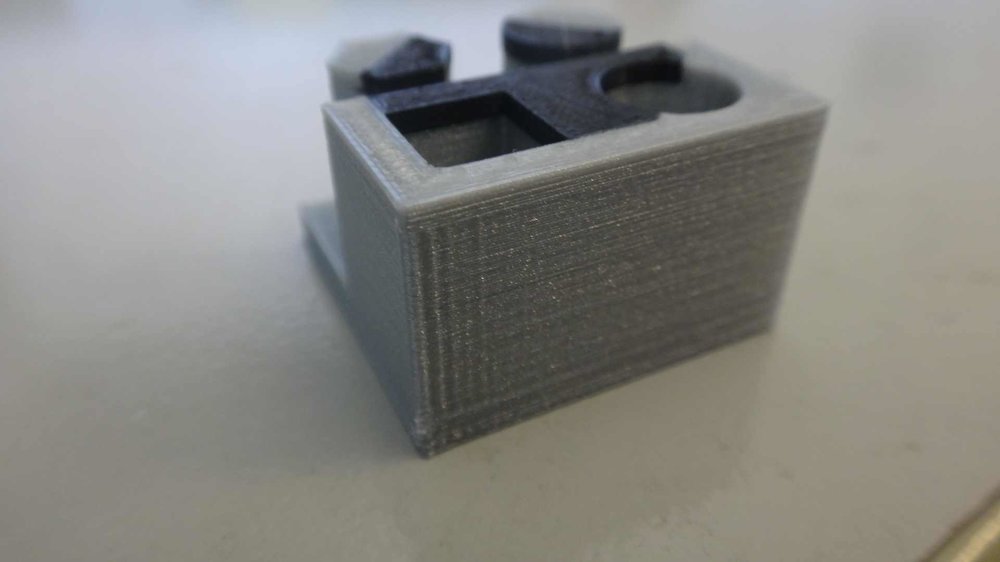 or in this thread (not the accuracy, the surface) 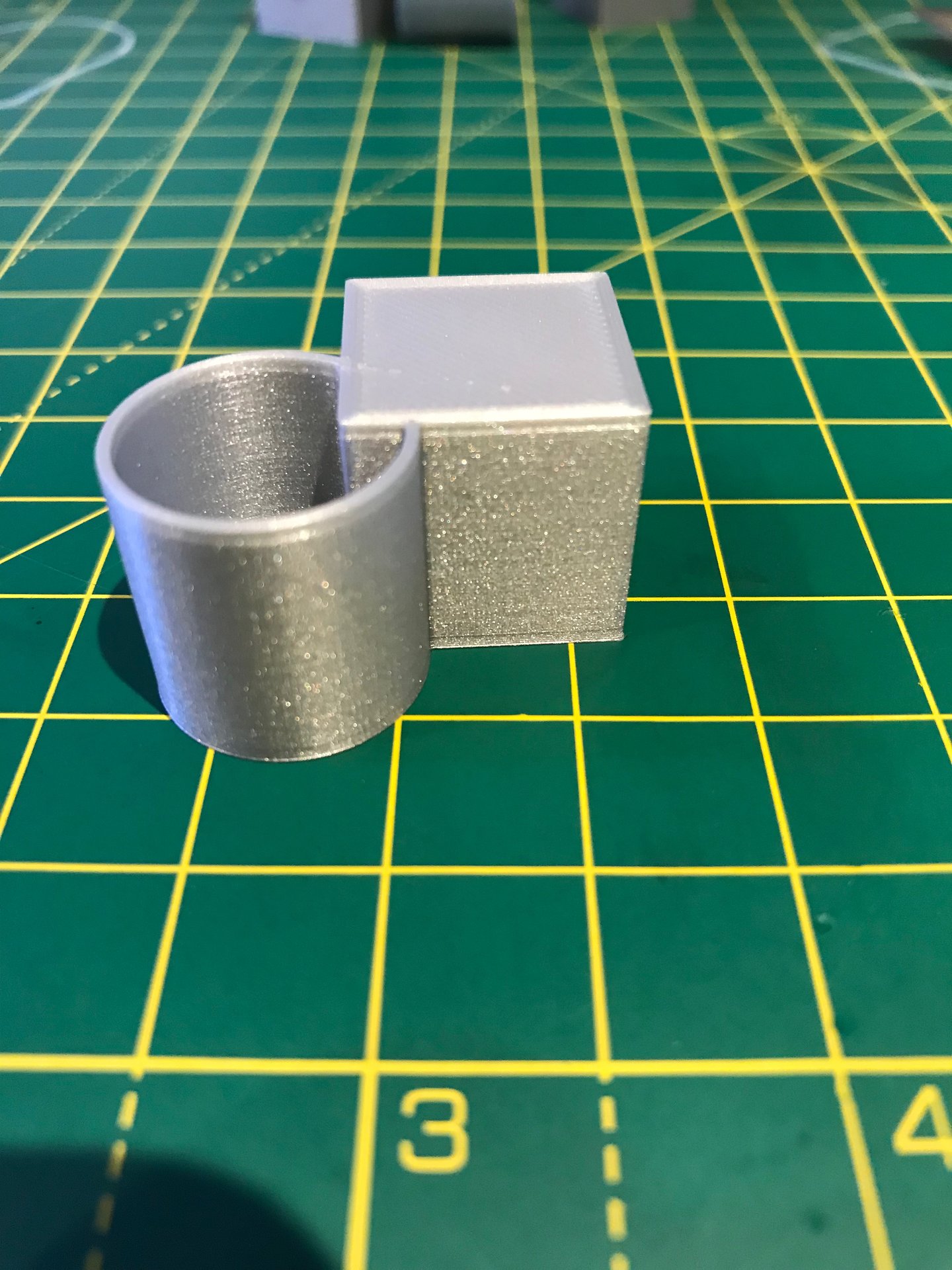 What have you tried so far?

What is the result with "first layer horizontal expansion"? Have you tried it?

Which other settings, profiles are you using?

What about the belt, have you checked the video and tried to loosen the pulley and tighten it again, that the belt is ok again?

It is hard to give hints to point you in the right direction, when you don't give us more informations and the results of previous advises. Only showing a picture of a bad print without details is not enough.

I fixed the belt drive and made the settings with "first layer horizontal expansion". the elephant foot now is less with the settings but not eliminated. (-0,3).

but what causes these pimpels  ? Can be several reasons, material, too fast, too hot, or some other settings.

Best you start with a default Cura profile, maybe the "normal" or "fine" one and only set the initial layer horizontal expansion and thats it. Leave all other settings untouched and use the defaults. Check if you have set the correct material profile. Use PLA for this tests, other materials needs more fine tuning, but first of all you should get PLA running. Then you should get a good result.

Next step is to get more dimensional accuracy. For that you should slower the speed and set all different speed types to the same value (inner, outer, ....) Use a speed of 30mm/sec.

You can also try to disable acceleration and jerk control (checkboxes in Cura), both can also help to get better accuracy, but on the other side you will get more "ringing" on the surface due the vibrations of the print head on direction changes.

If this also is not helpful, then you can play with "horizontal expansion" to give the whole object more or less in the x/x direction. But be careful, this is not a one time setup. Other material, even other color of the same material can behave different, so you should check it every time before you use a different material.

Regarding material: PLA is the easiest to print, CPE (PETG) is for example not so easy to print, also not with UM material and their default settings. So stay first with PLA, get some experiences and trust for our printer. If PLA works for you out of the box, then play with other materials.

to check if this has something to do with the z seam, set the 'z seam alignment' to 'user specified' and the x and y position to, for instance, 0,0. Then all the z changes are in the same location instead of all over the place.

The las post was made with default setup and only "first layer horizontal Expansion -0,3"

thank you for writing here. Sorry to hear your first prints are not to your satisfaction. Let's see if we can help. After reading the thread it looks like you have already been given some pretty good tips from @Smithy, @gr5 and @peggyb .

In order to be most efficient with everyones time and energy, it would be helpful if you could start with the base normal profile as per recommendation of GR5 and try one of the recommendations and post a picture with your findings.

It looks like your no1 issue, the elephant feet is almost fixed, right? The reduce horizontal expansion already eliminated most of it. If it is not eliminated entirely and you want it to be fully gone, play with the -0.25mm value. Want it gone more? increase the value slightly.

Problem no 2 is the bad quality, when I have a vertical wall this should be vertical

With a tighter back belt, what do your walls look like now? On your photo with the blobs (peggyb gave a tip re this), the walls seem to be pretty straight.

With clear feedback you can help us help you. Looking forward hearing from you.

the belt did not bring any better printings

but I think the small cylinder is the Achilles heel of the ultimaker.

I did read the site"mastering cura" an printed the offered files and a small cube.

the printings are much better than the small cylinder, surface is much smoother, some small pimpels. Not

good, but acceptable. I hope my work colleagues will also accept the Quality. Did you get an enclosure with your S5 to seal it off from the variations in temperature and humidity from the environment? I've found that a lot of my printing issues were initially from changes in temperature and heating and cooling fanning in the office space. The settings for materials in cura seem to work best in only ideal conditions with ideal materials. It is better to go by what temperature range is written on the material rather than by the cura setting for the material. Different PLA for example may behave slightly different because they came from different manufacturers or because they are filled with other materials such as wood or stone or carbon fiber etc. It is probably best to learn how to optimize your settings for each material rather than rely on cura to do it for you. IMO the settings built into cura for materials (which have come about in the last series of upgrades are good for baseline and you end up tweaking them anyways. Its difficult to know if a material when you purchase it will work 100% perfect with the cura setting. Historically some materials also did not feed as well through the bowden tube as other materials such as very flexible materials. The material setting in cura does not change the speed of the machine or the feedrate to make it work perfectly. Or did they add this feature on the S5? Some materials simply cannot be pushed out of the extruder fast enough to keep up with the speed of the print head and so you must slow down your print. Increasing temperature to the upper point of the material spec (on the material) often burns materials for exotic materials, sometimes even during retract actions.

I would say that the issues you have there require little tweaks so I wouldn't go crazy. If you want a print that is 100% perfect start with the material that ultimaker provided with your machine and figure out why that one doesn't print 100% perfect before moving on to another material and see how both materials differ. The ultimaker material will likely be the closest to the PLA setting in cura. I have to say initially when I received my UM2 several years ago with standard temp and speed I was burning the material. The first thing you might want to do with the ultimaker material and PLA setting is reduce the speed and temperature from the cura setting until you find the exact speed and temperature and fan speed that will create perfect bridges across block structures. This will likely be the best setting to use with the material.

The S5 does have enclosures/doors by stock, only on the top there is no additional enclosures available . Ultimaker told me that there is no need for this when printing (also with ABS)