Can "Initial Layer Flow" be used for adhesion? (it seems so)

200% would be more reasonable.  You want to squish the first layer quite a bit.  There are MANY ways to achieve this and I don't know which method is most common but I think it's by lying about the Z calibration.  Let me explain.

I'm going to explain with Ultimaker but it's the same idea for any printer.

Normally if Z=0 the nozzle is just barely, perfectly touching the bed everywhere.  The first layer in cura is typically 0.3mm (or 0.27mm often - close enough).  Cura normally then moves the Z to 0.3mm and prints with enough filament to fit into a 0.3mm height.  So far everything sounds normal/perfect/nominal.

However that will result in prints not sticking well and popping off the bed during printing.

So during the "leveling procedure" instead you use a piece of paper (the calibration card) that has a thickness of about 0.1mm.  When you "level" at the 3 points with the calibration card you are basically telling the printer that this is 0.1mm above the bed.  So you would think tha the printer would store internally that here is Z=0.1.  But no it cheats at this point and (depending on firmware version and so on) I believe it actually uses 0.07 on the UM2 (not certain as I never really cared all that much).

So when you print at 0.27mm above the bed you are actually printing 0.24mm above the bed and overextruding by .27/.24 or 12% (much more than your suggested 2%).  However this is horrible - parts still pop off the bed.  I recommend about 200% overextrusion on the bottom layer.  I just level it at the start of a print and leave it there for weeks at a time without needing to adjust it.  Here's my guide to the perfect squishing on the bottom layer.  You can fix it on the fly when the print starts.  Using "initial layer flow" is too much work as far as I know.  Except maybe for the S5 which doesn't allow you to disable auto level:

Examples of how bottom layer should look.  These pictures are from the internet mostly and I am just guessing that the bottom layer height for all of these is 0.3mm (cura defaults to 0.3 or 0.27 depending).  The numbers below indicate my best guess as to how far the nozzle was from the bed (again assuming .3mm is nominal).

The yellow one is a bit too squished but at least the part WILL NEVER COME LOOSE!  lol.  Danger is it might pull up glass when you try to get the print off.
The blue one is about perfect if you want it to stick really well.  This is my goal squishiness.
The red one is okay for small prints but for large prints they may come loose.  This is typical if you use the calibration card or auto level.
The black one is leveled much too high above the bed.
I aim for red or blue depending on my goals.

If I want it to stick better I squish a little more.  If I don't want the bottom layer to have a tiny brim I usually just set initial horizontal expansion to -0.2 or so but sometimes I instead go with what you see in red below.  For example if I'm printing tiny gear teeth, initial horizontal expansion of -0.2 will ruin them so I might go with -0.1 I.H.E. and level like the red one.

I usually adjust the 3 screws (BY EQUAL AMOUNTS) at the start of every print although once it's perfect I don't have to touch leveling for months. 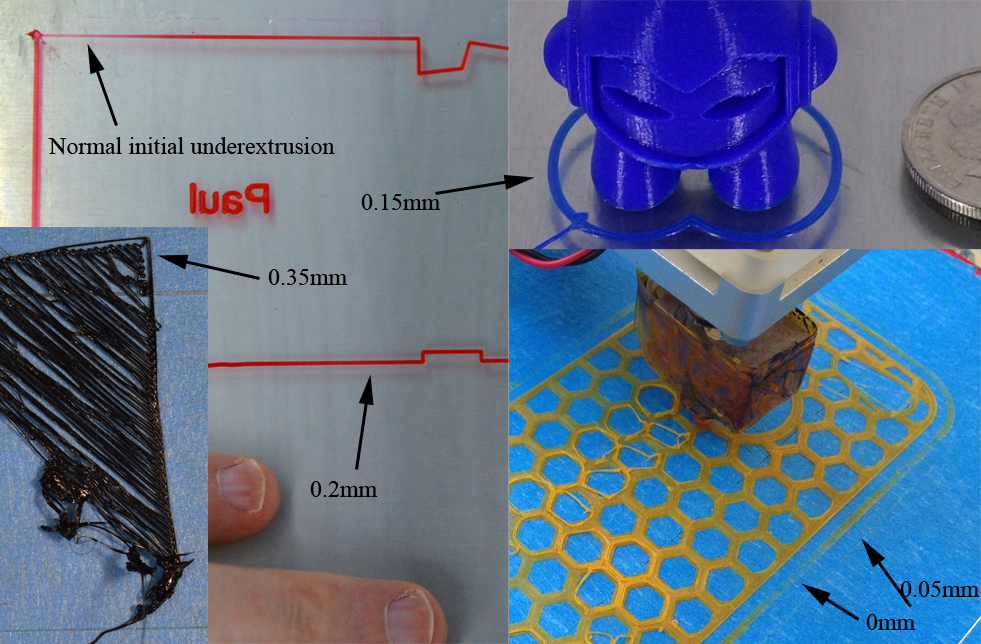 Thanks for the reply. I normally print with the offset of my Witbox calibrated in a way that the nozzle is a bit closer to the bed than it should be. There is no problem with this and I have to do it because if my print is very big, I have seen that the nozzle gets far from the bed when printing far from bed's center, enough to see some gaps, like if the bed were not perfectly flat.

Edit: this is the reason I'm looking for better ways to enhance adhesion, rather than squeezing the nozzle toward the bed.

It seems that increasing initial layer flow does improve adhesion. The problem I have with my bed is that the glass isn't homogeneous, and I can see gaps when printing far from the center of the bed. Here is the test I did with simple one-layer squares. You see that 130% of initial layer flow almost removes the gaps without overextruding too much the center of the bed, where the bed gets closer to the nozzle.

I hope this helps anybody ?

Lol well we are all different ? Of late I have been printing my 1st layer at 70% flow. This has nothing to do with adhesion, which for me is fine, but it gives me a much better quality finish, i.e. homogenous and flat, rather than "liney". Of course it will be impacted by nozzle to bed distance for 1st layer, which for me controls the adhesion but I started to get poor consistency in lay down which in the end I convinced my brain was over extrusion (subsequent layers were perfect) and the reduction in 1st layer flow fixed it.

The flow control was done using Repetier Host not Cura but I am guessing they are the same thing.