By Dim3nsioneer
December 18, 2013 in Coffee corner

I don't get the knots on my prints (changing to KISSlicer got rid of them for me, but I haven't tested the very latest cura so that may not be an issue anymore) but I do get the visible layers. Have you tried measuring the diameter of the filament in more than one direction? My filament seems to be slightly oval and I'm thinking that may have something to do with it.

I can confirm that with the ovality of the filament. I think every filament has some? Actually, I get a larger diameter when measuring in radial direction compared to axial direction. I usually take the axial measurements as I think the bending around the reel might make the measurement quite arbitrary.

Thanks for the hint with KISSlicer; as soon as I have set it up for the Ultimaker, I'll give it a try.

What about the temperatures? Higher, lower or the same as for pure PLA?

I print with the ColorFabb PLA/PHA a fair bit and I have always found it prints better at a higher temp.

I use 224-228deg C. I am not saying that is an optimum temp for you but it is typically 6-8deg higher than I print with Ultimaker PLA and 10+ deg higher than Faberdashery PLA.

Here's my profile for KS to get you started. It's not perfect by any means but gets the job done. http://theintarweb.net/ultimaker/KISSlicer%201.1.0.zip

Here's my profile for KS to get you started. It's not perfect by any means but gets the job done. http://theintarweb.net/ultimaker/KISSlicer%201.1.0.zip

That's exactly what I was up to... :grin: Thank you very much!

What I can say is that colors have a heavy influence. The two samples were printed with ColorFabb fluorescent green and yellow with the same settings. While yellow behaves almost like regular PLA, the green looks much more "liquid". 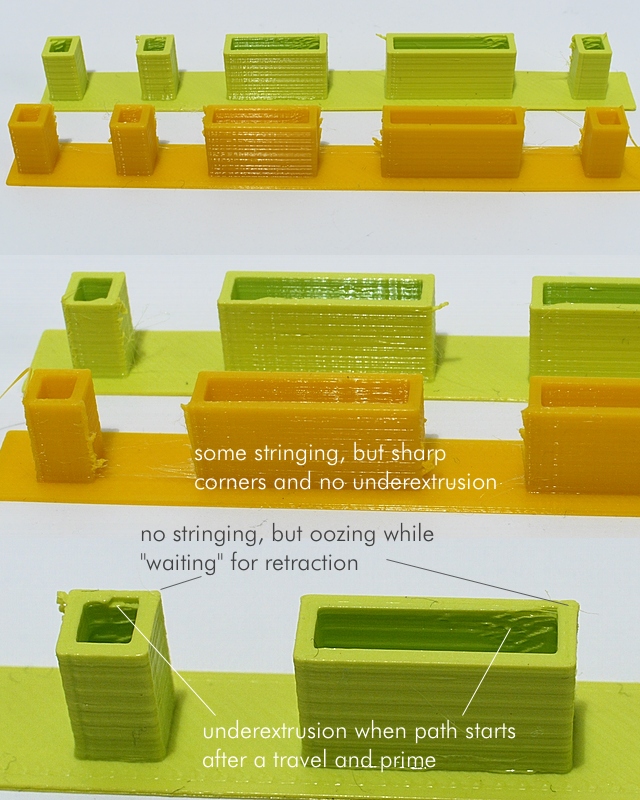 But in both cases the extrusion / pressure graph doesn't match with the nozzle movement very well. There is always to much pressure at the end of a path when the printhead stops and "waits" for retraction, while there is insufficient pressure after priming for a new path. You can see the round corners in the green part, especially at the corner where the path ends. And you can see the extrusion gap at the beginning of a path. It looks like the lower PLA/PHA viscosity doesn't forgive as big pressure changes as standard PLA.

I would really appreciate having something like the Jetty-Kubicek-Newman (JKN) algorithm implemented as it addresses this issue. While regular PLA works quite well without that kind of fine tuning, my impression is that it would be very helpful in this case. It looks like the real pressure is always a little behind the actual requirements. Of course, you could go slower but that would mean curing the symptoms only.

Funny how we get different results. I have been doing a lot of work with Faberdashery PLA over the past few weeks, running mostly at 60 m/s and 210 degrees. On Saturday I opened up my first reel of Colorfabb (Dutch orange) PLA/PHA. Wow it was so much better. I ran the same speed/temp as the PLA.

I did not suffer under extrusion on path start or oozing during retraction but, printing 4 copies of the same model simultaneously I was suffering some oozing during the travel from the last model back to the first model. Reducing the temperature to 205 fixed that. So I seem to be somewhat lower in temps. Of course a couple of print runs does not mean I have the optimum setting.

Right now I do not think I will be going back to PLA.

I use colorfabb white; and whatever temperature i choose, i get these dreadful strings. Corners are never straight with this plastic. Not even talking about retraction. Best results i had with 235 degrees. I am capable of printing 150 mm/s with filament twice cheaper than colorfabb. Please tell me what to do with a box full of 165 euro garbage?

anyone find a solution to this, got some lovely leaf green but it blobs constantly

Dim3nsioneer, what is the size of the object?

I use colorfabb white; and whatever temperature i choose, i get these dreadful strings. Corners are never straight with this plastic. Not even talking about retraction. Best results i had with 235 degrees. I am capable of printing 150 mm/s with filament twice cheaper than colorfabb. Please tell me what to do with a box full of 165 euro garbage?

Must be some variation with different machines - I print architectural models in colorfabb white and love it - but I mainly use a .65mm nozzle and it seems to work best for me at 220 and above.

Dim3nsioneer, what is the size of the object?

Uhm, I don't have it right in front of me but the width you see must be something like 5-6cm. Is that sufficient for your question?

Maybe you can send the stl to me abd I can print it to compare?

I guess you mean traffic red? I have it loaded in one if our UM2s

Yes, it is traffic red. http://www.thingiverse.com/thing:26334is the model (one piece of the four, but they look the same in terms of print quality).

Colorfabb fluorecent green and leaf green are in my list of favorite colors...

Hello, I just ordered a new PLA on igo3D INNOFIL3d, making the Netherlands, for ultimaker.Des that I receive, I test to see its quality.

I like Innofil PLA,  I'm pretty sure they are also (one of) the supplier(s) of the Ultimaker PLA.

Just started printing small parts for my board game – photo's will follow as promised – with ColorFabb PLA. Standard Cura settings and what beautifull results.

So on topic of Dim3nsioneer: I've got a standard UM2, standard Cura normal quality settings and ColorFabb just works great. Must be something in you UM.

I usually get great results but recently, cura 15.02, I am seeing the blobs and retraction issues and strings.

I noticed that the filling is very ragged. Bottom, sides and tops are perfect, but filling goes wrong. I think speed is to high. With the transparent Colorfabb that lead to problems and i had to abort the print.

filling goes wrong. I think speed is to high.

yes I think the defaults for new CURA have that set too high. I always use expert setting and make those all zero to they will use the print speed setting. I do leave 1st layer speed slow. I am having similar results with the silver. I had to push the temperature up to 228 C to resolve them; but, I am printing with a 0.2 mm tip on a Merlin hotend.

You might want to clean the nozzle, I have the same issue when I change from XT (or regular PET) to PLA, not perticular to ColorFabb PLA/PHA.

After using the atomic method for cleaning the nozzle the issue is solved for me.