UBIS Hotend on an Ultimaker

That's the one. Thanks.

anyone (preferably in europe) who has 3 mm. ceramic ubis hotends they want to sell?

When my last hotend failed, I took that opportunity to swap in a hotend I had wanted to try for a while - the Printrbot UBIS ceramic hotend. It has a lot of great features - light weight, small, no assembly, seemingly clog proof, extremely fast heating and very rapid temperature adjustments.

The mount I designed is extremely compact, as well as simple to install and maintain. I think this is the best spent time/money I have ever put into the machine, as it has increased the print quality and drastically reduced time spent debugging the machine.

Going along with that upgrade is a change from a printhead-mounted fan to a frame-mounted crossflow fan, as suggested by foehnsturm. (I purchased mine from Amazon here: http://www.amazon.com/gp/product/B001NPEBJM/ref=oh_details_o01_s00_i00?ie=UTF8&psc=1 )

Unfortunately, stock of this hotend seems to be low at Printrbot, but I believe this is the best setup I've ever tried on an Ultimaker.

I picked up the crossflow fan from the OP, and I am thinking it looks not very wide. How is it working? Would it be better to send it back and get something wider? Is there another fan that is more recommended and readily available in the U.S.?

How do you mean, not very wide? Picture, please

The part is an FX121 Cross Flow Fan made by Silverstone. 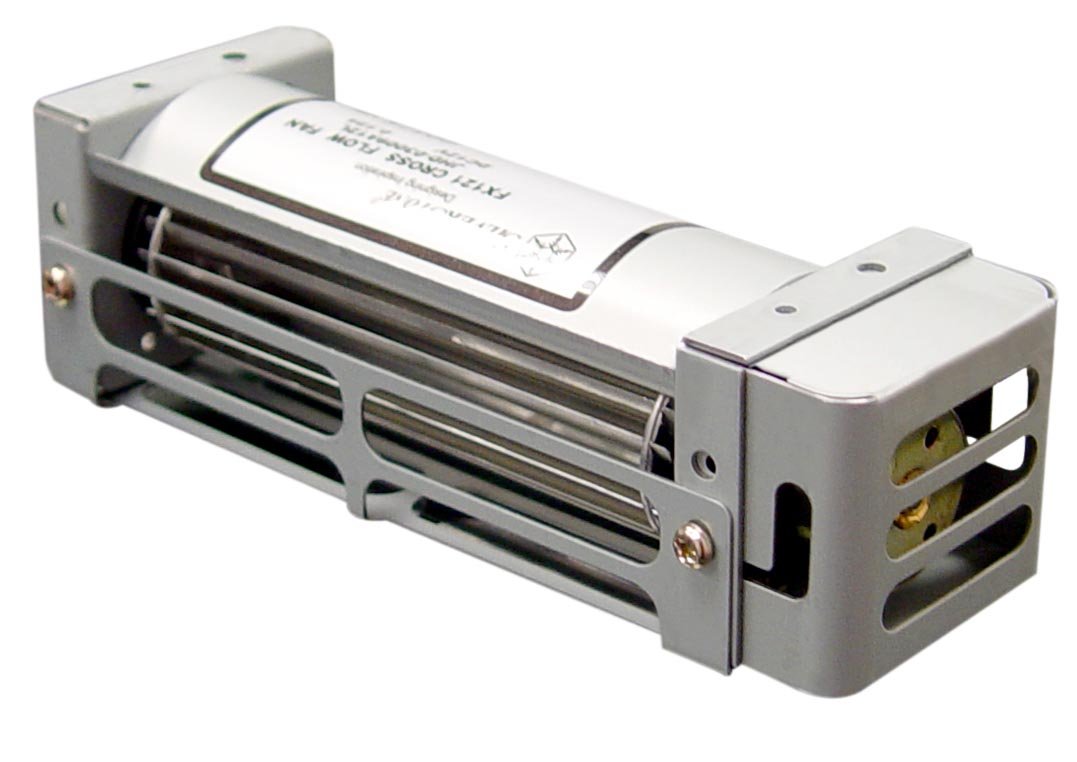 contacted Printrbot, asked for 3mm Ubis, they put some in the store and told me, a new batch will arrive end of this week. Great! Only problem: it's the cartridge version... Some ordered it. How does it perform? Is it worth the money? Buy or better not? Anyone got both and can compare one to the other?

According to the Printrbot page, only difference is slower heating, but as Foehnstorm mentioned it looks longer, so the transition zone might be longer... Experiences anyone?

The Merlin hot end looks also very good. First reports sound promising. Will get that one for sure. Foehnsturm compared both, said the Merlin is even a little better anyone else tried both? And can make a comparison in this or the Merlin thread?

I am looking for a light, reliable hot end, which offers fast AND precise prints and is a good match for the cross flow fan. Suggestions, what might also fit? I think the original hot end is the bottleneck in the current setup and there is still room for improvement.

@ aviphysics: I would give the silverstone cross flow fan a try. I installed a wider fan which should cover the whole build area. Measured the airspeed with an anemometer and found out, that the airspeed is not the same everywhere. There seems to be a maximum in the middle, but it works great, better than the original setup and the duct I tried before.

Perhaps I should do some tests with smoke or sth. Like that in the future...

So there I was yesterday happily printing away throughout the day. And in the evening when I started my soon to be final print, I extruded a bit of material to prime the nozzle, and then tried to remove it with tweezers, like I usually do.

But, when I touched the brass nozzle of the UBIS with the tweezers, the thermistor EXPLODED. Yes you read that right. There was a flash, and a loud bang, and bye-bye thermistor.

How on earth did that happen? o.O

One time I did see something glowing near the heater coil of my UBIS, but it stopped shortly after and my hotend has continued to function for months after. Maybe some of the heater wires are not fully insulated there?

I honestly don't have a clue. First off, I had no idea a thermistor even could explode. Secondly, I don't see how touching the nozzle with tweezers (which are insulated with rubber grips btw, just for the record) could produce that effect. I didn't short anything except the nozzle with, well... the nozzle!

If the thermistor was shorted in any way, it wouldn't report temperatures as normal, which it did. Everything was 100% normal until the fatal tweezer touch.

I just hope my new electronics didn't get fried in the process. So far it seems ok, I'm getting some new thermistors today and I'll try to replace the broken one. We'll see what happens next...

Sounds like an ESD. But I've never heard of exploding thermistors either... That would require a lot of energy!

If your thermistor exploded because it was overloaded with electrical energy, then this energy should theoretically also have gone through the wires and into the sensor circuit. The UM1 board does not have any ESD protection whatsoever on it's I/Os, so there could be some damage there...

But you'll notice that if it doesn't work anymore. As long as it keeps going, just look the other way..

By the way, I touch the nozzle with tweezers all the time. Non-insulated tweezers. I'm usually wearing ESD-sandals, but we don't have an ESD floor...

Note that insulated tweezers are still able to be statically charged!

I'm aware of the ESD issues, but I don't think the thermistor should have been electrically connected with the nozzle.

Anyways, just got a bunch of thermistors, so I'll switch and test today, Wish me luck.

PS. I don't have UM electronics, I switched it for Megatronics V3.0 with DRV8825 drivers a while ago.

Looks interesting, that board..

I like the "Powerful Atmega2560 processor with 256 kB memory, running at 16Mhz" statement. LOL. My watch has a better CPU o.O (actually it doesn't)

I see this board has an integrated heated bed driver (1.7mOhm MosFET, even from IR, my preferred manufacturer *like*). Very nice

Seems like one more thing that hits this month's bill

Can you still connect the Ulticontroller to this board?

No clue about the Ulticontroller, I was thinking of getting http://www.sainsmart.com/3d-printing/3d-printing-modules/sainsmart-smart-controller-ramps-1-4-lcd-12864-led-turn-on-control-for-3d-print-1.html instead.

The heatbed driver works like a charm, no more relays for me.

I did a pseudo-review on my blog, IDK if you've seen, but it covers the basics. I'm not sure but I seem to be having some issues lately (I'm not sure if it's related to the board though), so if you are planning to buy such a board I'll PM you about it, to quit the thread hijack.

I've got one of those Sainsmart controllers. You have to put one of the connectors back to front (cut the alignment pip off) then it works perfectly on the UM control board.

Several people in here have mentioned contacting Printerbot, asking about stock, and if they could put more hot ends in their store etc.

Anyone care to share how they contacted them? What email/contact form did you use?

I can't find any email info on their site, and wanted to contact them to ask what version of the hotend they currently have in stock (ceramic or cartridge), since the store just says that they will ship whatever version they currently have stock of...

I enabled the DOGLCD in configuration.h to get it to work

To anyone using this hotend:

After making iterative improvements to the printhead over the past few months (This is the 24th version!), I have just posted to Youmagine a significantly improved design. It adds strength where it matters, removes material where it doesn't, and should generally be more usable + more reliable. One important thing to note is that excellent layer adhesion is important for screw boss strength. Use a good PLA, hot, or know what you're doing in another material.

In case if you'd like to use UBIS for ABS print: I added two big massive 45° fan mounts to Nick's UBIS carriage and uploaded the model to https://www.youmagine.com/designs/ubisxultimaker-printhead-with-double-sided-45-fan-mount. ABS requires moderate cooling. I'm using two 40 mm fans and they are running on 65% power.

No clue about the Ulticontroller, I was thinking of getting this controller instead.

The heatbed driver works like a charm, no more relays for me.

I did a pseudo-review on my blog, IDK if you've seen, but it covers the basics. I'm not sure but I seem to be having some issues lately (I'm not sure if it's related to the board though), so if you are planning to buy such a board I'll PM you about it, to quit the thread hijack.

Please, would you show your heatbed driver?

Need also an relay or something for my new 300W heatbed!

Thank you in advance!

Does anyone have part numbers for the connectors I need to make a cable to get the UBIS hooked up to the UMO board?

Does anyone have part numbers for the connectors I need to make a cable to get the UBIS hooked up to the UMO board?

Hey there, im currently using a huhe radial fan mounted on the side and 1.5cm diameter tubing (x2),with decent results but thinking of trying your setup. Does it still hold up after 2 years or did you do any improvements? I also wonder about what someoone has already asked- does the other side of the print come out just as good as the side directly facing the fan? Thx