By owenhamilton,
January 8, 2014 in Coffee corner

Like you said, when you install Cura at some point it runs a separate installer that installs the Arduino driver.

I recommend the 1.0.5 windows installer.

After you do that if Cura still can't connect here are few things to try:

1) When you connect or disconnect the USB, windows should make a two note sound. The pitch goes up when you connect USB and down (second note lower) when you disconnect. That should happen even without the arduino driver.

2) If that is working, try running device manager. I have windows 8.0 with "winShell" so I'm not sure how you do it on win8.1. I just hit windows key and type "device manager" and after a few seconds windows finds it for me and I click it. If the arduino driver is working, the Arduino (which is inside the UM2) will show up in the "com ports" section. If it isn't working it will show up in the "USB" section and with a yellow caution/error symbol. You know it's the arduino because if you unplug the USB it goes away and when you plug it back in it comes back.

Thanks again for the help.

I'd really like to get this fixed as soon as possible so if anyone can answer my query I'd really appreciate it.

When you installed Cura there should at one point have been a SEPERATE installer that launched and installed the "arduino driver". You may not have noticed it.

Did you check "device manager" to see if the arduino shows up as a "com" port versus a "USB unknwon device"? 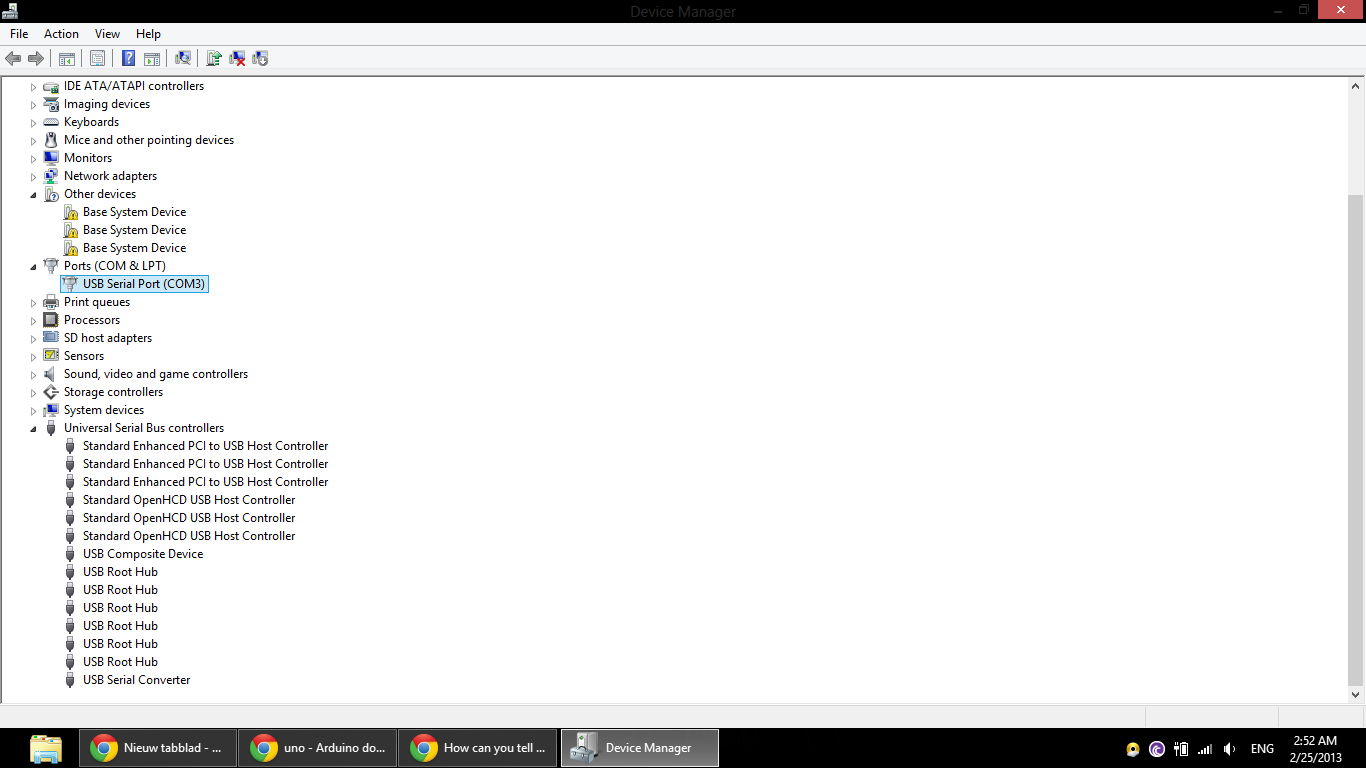 Example of problem - arduino not recognized: I found these images by googling images for "device manager arduino"

There are probably a million arduino users out there and thousands who speak every language. The arduino is very very popular compared to the ultimaker. So you are lucky that so far your problem is arduino related and there are many people who know how to fix this on google.

When you installed Cura there should at one point have been a SEPERATE installer that launched and installed the "arduino driver". You may not have noticed it.

Did you check "device manager" to see if the arduino shows up as a "com" port versus a "USB unknwon device"?

As I said in my original post, the driver installation failed so Ultimaker support advised me to install the Arduino drivers separately. The 1st person to reply to my post told me what I needed to download which I have now done but I wan't to know how to make it work once installed. Thank you.

I've realised what part of the problem may have been, my PC doesn't have it's com ports enabled, once I figure out how to do that it might work, sorry again!

I think you need a little history. A long time ago (1970s) computers used "COM" ports which used a technology called RS232. This technology has persisted to today where it was used for keyboards and mouses but not much else when USB took over. Now finding a RS232 mouse or keyboard is difficult. Modern day Mouse and Keyboard use USB instead.

So now along comes Arduino. The programmers don't want to write a full USB driver for the arduino because it is very complicated and takes up lots of memory on the Arduino (there are many models of the Arduino - the original one had very little memory - the "Arduino Uno". The one with Ultimaker is much more powerful).

edit: Actually I think possibly this is done on a chip on the arduino board with built in firmware to become a usb device.

So you don't in fact actually have any COM ports. It's just that the Arduino driver *simulates* a COM port.

Just a couple of points in response to the above post (that don't actually matter much but I figured I'd point it out regardless).

Yes, I'm pretty sure they use the now classic "FTDI chip".

You can enable/disable ports in the BIOS.

Quite a few motherboards have headers for it still, just plug in a cable and you're set.

This is getting me more and more confused by the minute, I've checked my BIOS and there is nothing in there about COM ports, I've asked the manufacturer about and am still waiting for a reply, if it turns out it is ok, what do I do within Arduino to get it to work?

Wow. You *are* confused. Let me try again.

1) You don't need any com ports on your computer to connect to an arduino. The BIOS stuff is just history. Forget about BIOS.

Do you know what simulate means? Maybe you should look it up.

We are taking this very sloow. It may take a few days but it seems we need to take very small steps.

To manually install a driver

You must be signed in as an administrator to follow these steps.

Swipe in from the right edge of the screen, and then tap Search.

(If you're using a mouse, point to the upper-right corner of the screen, move the mouse pointer down, and then click Search.)

There is no need to be rude!!!!!! It should just work, yes of course I know what simulate means. I don't know which driver I am meant to install as I don't know what board is in the Ultimaker 2.

Sorry. Don't mean to be rude. I'm trying to explain it clearly. It seemed like you misunderstood the concept of simulate when you started talking about chaning bios settings for COM ports when there is no physical COM port needed for the ultimaker (it uses USB).

When my first explanation didn't get through to you I tried something simpler.

I thought all the arduinos had the same USB driver. But if you really need to know, as Robert says, it's the 2560. I believe that is the most capable of all the Arduinos (most memory, most IO, fastest cpu).