@Mr Waldorf (or a moderator)

I should be taken off the bad extrusion list in the poll at the start of this thread and moved to the "no problem" section. Since I fitted the new nozzle that Ultimaker kindly sent me, the extrusion has been perfect. I've just read almost all pages ! And I say ok let's try with original configuration to see what can my UM2 do ( spool on the back side without guide ).

And the result is beyond my expectations !

No extrusion problems but getting ugly from 7mm3/s.

Looks pretty good to me Tom ! 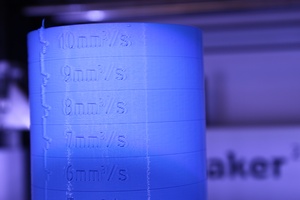 Let us know how you get on with the ABS when it arrives.

Mine (new last week) did 10mm/s sec no problem, with moderate horizontal blurring of the text at 10. I probably could have raised the temp 2-3 degrees to reduce this issue. I'm a happy boy - great printer.

Hi!! Remember me? I'm one of the last people on Earth with a UM2 that does not work like it should. I have been hoping that someone would declare victory, but that hasn't happened, or I missed it. My printer is now amazingly slow. I'm afraid that in my desperate attempts to get the thing going I have permantely damaged some part. Most likely the nozzle or white teflon piece. Sander promised me a new nozzle and teflon piece on April 17th. Still no sign of the parts. I sent him a PM recently asking about delivery, but I have not heard back. I'm stuck right now printing C-130 parts at less than 2mm3/sec. Big parts + slow printer = 20 hour + prints. When I have tried a cylinder, it fails in the 3 ring with every filament. Sigh . . .

My printer's slow it will not go.

My printer's slow. Why? I do not know.

I even tried to print Daid's cat.

I'm waiting for parts to arrive,

then maybe my printer will come alive.

Patient I have been you see.

I want my heart to be filled with glee.

I also have a song that follows the "You Were Gone" song from Hee Haw. I figured no one in Europe would know what I was talking about.

Please don't sacrifice a chicken. That gets messy, and the bits of feather are impossible to get out of the Bowden tube. I did send you a PM though with some other ideas of things to try. :-)

I thought this thread was dead, last time I checked things were going well. Sorry to hear about your woes Schafe.

Now that I've had my UM2 for a while and have spent, uh probably too many hours watching it print stuff out I've got a slightly different perspective on the machine. I keep forgetting to ask this question, but does your extruder motor skip backwards when the cylinder underextrusion happens?

I've got perfect cylinders on every material I've tried; and I've tried full, half full, and almost empty spools with no difference, and all on the stock holder. I've had two underextruded cylinders, each failing at 10 mm^3/s; cylinder 1 was being extruded at 200C (I was testing to see how fast I could print at very low temps), cylinder 2 was being extruded at 150% so that one was definitely going to fail. Never did the extruder motor loose power and skip, I don't think my machine is exceptional or anything, the extruder motor will skip sometimes when the machine primes the nozzle at the very beginning of a print or if the bed is too close to the nozzle and there is not enough room for the plastic to come out on the first layer.

My extrusion tests start to fail at 7mm^3/s and I always hear the extruder skipping. However I have seen underextrusion occasionally where the extruder didin't skip. I think the later indicates some kind of clog or another issue not related to the extruder.

Obviously you can raise the temp or slow down the printer but...

If it were me the main things I would try:

1) put the filament on the floor. It's so damn easy to do. Build a filament holder out of knex or wood or something.

2) The next more difficult thing to do is to take apart the print head and drill out the white teflon "isolator" to 3mm. I mean remove it and slide some curved pla through and if it gets stuck then drill it out. To take the head apart first remove the 4 screws for the fans and let them hang, then remove the 4 thumb screws completely and put aside, then remove the 2 screws holding the rear fan on (careful there is a spring. Now you can remove the isolator and test it. If it is fine then:

3) Consider cleaning that nozzle. You have to probably heat it to 180C to unscrew that nut with the holes through it - slide a thin screwdriver through opposite holes and rotate it until the nozzle is loose. Then cut heat power and unscrew that very long screw with the tiny allen at the top - try not to strip the allen but not a disaster if you do. You need to remove (or at loosen) that before the temp probe and heater element slide out. Now take that nozzle and burn it in some flame - try to get the temp that burns away any PLA without melting the nozzle. You should see flame and fire and blackening of PLA for maybe 10 seconds, then remove from heat for 10 seconds and repeat until only ashes are left. Then soak in acetone (not 10% acetone, much stronger) for an hour. Then put it all back together.

Well, it looks like my under extrusion problems are gone

Unfortunately I don't have a test result with this model from before I did the mods, but I know I was limited to around 5.5mm/s even printing at crazy hot temps (260)

Printed another at 205 C, 53 C bed, also no signs of under extrusion. (I dropped the bed temp because the test at 60 C showed shrinkage on the first 5mm or so)

Hello everybody and thank you for your help!

I have read also all the pages and give a try to my ultimaker2, I tried the ultimaker PLA blue that came with the printer at 210 C. You have the image below.

I have the filament guide and what I did from the begining was to apply grease to the spooler support to facilate its rotation, it seems to work well...

Then I tried the innofil3D from iGo3D pla natural, at 210 C, and here you have the result...

I am a very proud user of UM2, ultimaker2 rocks!!

Me, I'd replace the original part by what the other was worn by long prints. 10 hours ....

But I switched to a new extruder which has its own guide lamps. Since I imprimme without problem 7/8mm cube / s

If anyone wants to guide me through solving this - here is my current problem:

I have had the UM2 for nearly 6 months, and I have got reasonably experienced.

However, recently I have been sensing a few problems with under extrusion - most recently I noticed that the first layer was sometimes skipping, presumably because it was a higher rate (0.3mm x 20mm/sec) compared to all my prints (0.1mm x 50mm/sec). I print PLA at 210 degrees.

Overall as a printer I am fairly happy with the results, because I print slow - but clearly my UM2 has issues, revealed with this test print today - first time I have tried it.

2) The one time I tried printing ABS I gave up after a hour, maybe something is still in there

3) My UM2 is in my garage. Its pretty dry, but not like inside a house.

If anyone wants to take a shot at the best first thing to try - fire away. I would dream of 10mm clean print…...

you should read this:

you should read this:

Thanks for the tip - certainly I think the feeder has something to do with the problem, but even if I really babysit the feeding and push hard, I still have problems at 4mm

Incidentally - having read may other posts, it seems that UM2 is supposed to come with some sort of filament guide which you go around between the spool and the feeder.

So, currently my filament comes off the spool and direct into the feeder.

Should I have this filament guide ??? Where can I get one ?

And i am Back to the Roots...... Skipping @3mm like in the beginning

The only things i noticed are the Bowden tube has worn down quite a bit and the teflon piece at the extruder widened up to 3.4mm... otherwise everything seems fine.

But both reasons should not get the feeder to skip....

The fact that your reel is getting towards the end probably isn't helping. The printer is also aging, and possibly the teflon coupler at the hot end and/or the nozzle have become blocked. It's possible that some of the ABS might still be clogging the hot end.

I was working on a printer this weekend that exhibited similar results, and replacing the teflon part and the nozzle itself restored it to full working order, capable of printing 10mm³/s again.

I'd start by just heating up the nozzle to 260 degrees, and flushing some PLA through it. Perhaps repeat the extrusion test a few times at that temp, and see if it helps to clear out any remaining ABS.

The filament guide didn't come with early printers. It's not really necessary for single extruder models... and I'm not sure it's very helpful anyway. Where are you located, btw?