All the many years before, I never had anything to do with 3D printing and CAD.

Since then, I have a UM2 (big thanks), I have tasted blood, and for a few months I try to create useful things.

Currently, I construct a really big Bowden material feeder. Mainly for the UM2, but universally usable with adapter plate. There will be additional setting possibilities. Various knurled wheels types are possible. It can be used different couplings without having to reprint the entire feeder. There are also hose and cable management. Low costs for additional mounting material, etc.

Not ready yet, but soon it will show up.

For All, of course Unconditionally freely accessible, which might later want to try it out.

I make all my designs to date with the free version of SketchUp (SketchUp Make 2014).

I have an UM2 and I have created some simple things in Sketchup, but I selected "I am learning" as I don't qualify myself as a full scale modeller (yet)

Solidworks 2014. Originally compared with Inventor but preferred the SW interface and general process - you seem to be able to achieve most things with less clicks. Broadly speaking I am sure they pretty much deliver the same functions. Like the SW collision detection and stress analysis functions.

I have designed many different things- several different swimming pool skimmers, replacement cooker gas knobs and a clip to attach an umbrella to a child's push chair.

Each improves my CAD knowledge, very glad I stuck with the printer and am now very pleased with the results too

Thank you guys for your feedback.

So, in Markus case he didn't start 3D modeling before he had his UM2.

Does this go for you as well Blizz? / Stu / Yellowshark?

I used sketchup for many years before I got my printer. It was for dozens of projects but the ones that I spent the most time with were architecture related (helped some people with design of observatory, several additions to my house, trying out paint color schemes). But sketchup is for visual models, not printable models. I am amazingly fast in sketchup however I've been using DSM lately. In the past I spent most time on texture colors and patterns. Not needed for 3d printable models. Here is an example of when I was trying out different kinds of tile patterns for a bathroom remodel in some rental property I own (sketchup): 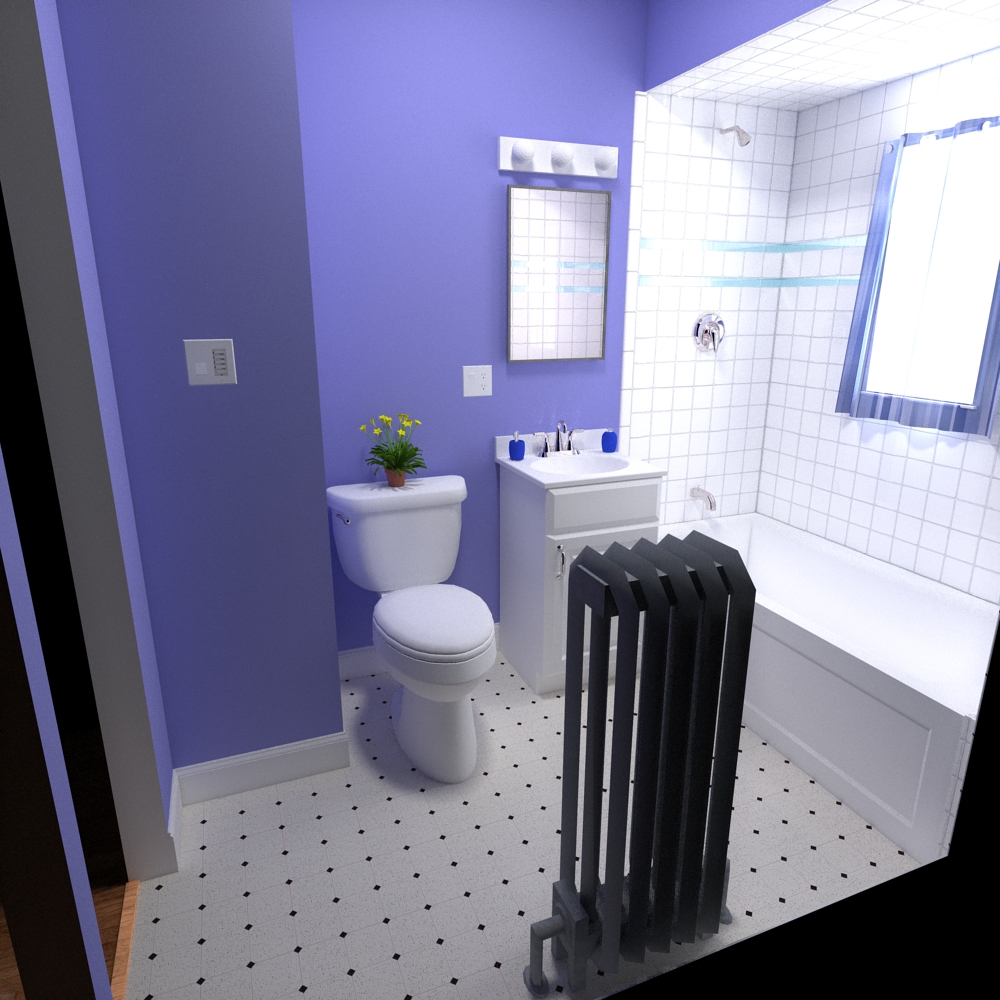 Thank you guys for your feedback.

So, in Markus case he didn't start 3D modeling before he had his UM2.

Does this go for you as well Blizz? / Stu / Yellowshark?

In my case I studied engineering drawing at school so thought I would easily understand CAD, I have worked with computers all of my life, but school was so long ago that I really had to learn CAD from scratch.

I find it very gratifying to visualise something on the screen and then print it and have it in your hands a few hours later.

EDIT - just uploaded the first pool skimmer design, no photo of the real thing because its in the pool !!https://www.youmagine.com/designs/swiming-pool-skimmer

I'm a software engineer, and while I've written my own 3D graphical modelling programs back in the 90s I (ironically) have never needed to use anyone else's software before now.

In general I hate all 3D CAD packages. I just don't get on with them at all- they all claim to be easy to use but aren't. They all face the fundamental problem of trying to do 3D manipulations with a 2D input interface.

I get on much better with OpenSCAD, but of course my models look rather rustic compared with the rounded/bevelled edges and fillets and so on available in some of the better packages.

Solidworks! Have you seen how much it costs? :shock: Can DSM do threads yet?

Can DSM do threads yet?

What's a thread? You mean cpu utilization? It runs very fast on my machine. I don't know about threads.

All cad packages have a large learning curve before you can make say a door hinge in 3 minutes (as you should be able to!). It's very frustrating. I'm getting much better at DSM (design spark mechanical) and really loving it. I can see that one day I will be faster at DSM than sketchup. Probably a few years from now as I only design 1 thing per month.

I've designed the sport fencing products I manufacture and sell using Moment of Inspiration, and use TinkerCAD for simple stuff.

Solidworks! Have you seen how much it costs? :shock: Can DSM do threads yet?

LOL that is why it is so good.

Sure for simple 3D models for printing it is OTT but if you need to take Solidworks part or assembly files from customers to work on then going down the STL or even STEP file route will not work, you have to have Solidworks.

Hi, well I used Cinema 4D for a few years, dabling with 3D modeling. Just got a chance to work on an UM2 now, so no models were created yet for the purposes of 3D printing. But I am planning on doing some models in C42 for 3D printing as well in the future.

Sander I have worked in the game sector for 6 years so I came in contact with 3d modelling a lot, but I have never done it myself before I bought the printer. I always figured that if I'm spending so much money on something, I should at least be able to fully use it.

I mean a screw thread. Some of my projects involve metric threaded holes, nuts and bolts.

Never done any serious stuff before getting a 3D printer. If you consider Eagle for PCB desgin as CAD, I have used for a few small things.

Shameless plug - did these in DSM:

Recently purchased Moi3D to do some fan ducts. DSM doesn't have the loft/blend function required for fluid translation between shapes.

I really, really wish one of the SpaceClaim packages or Solidworks had hobbyist/enthusiast pricing.... Moi3D for about $300USD is high for some but was something I could afford.

Used to play around with modeling in povray to make images like gr5 showed. But only started 3D designing seriously after I decided I wanted a 3D printer about 2 years before I really got one this March.

Like DonMilne I have never gotten along with 'real' CAD programs but luckily there OpenSCAD with which I (being a programmer by trait) can get along with perfectly :smile:

I'm a software engineer, and while I've written my own 3D graphical modelling programs back in the 90s I (ironically) have never needed to use anyone else's software before now.

Interesting. Want to say a little bit more about the software you designed, maybe add some screenshots or so.

Personally, I never did any 3D modeling before I had my Ultimaker, and I am very eager to start learning Zbrush.

I have been an Illustrator before and I think it would be amazing to bring the characters I already drew to 'life'.

But in the few attempts I have made to learn Zbrush I ran into this steep learning curve.

In the past I educated my self with other programs etc, but now the sw is sooo big and all the terms are new.

So I am waiting for an opportunity to take like 2 weeks off, lock myself in a room and don't get out before I have a

clue of what I am doing

And do you use your cad-modeling-powers more for like.. aesthetic designs or functional?

I am a manufacturing engineer, so I learned the basics of Solid Works and Catia at university. Always have been interested in 3D modelling so I modelled some rough Star Wars stuff in Bryce 15 years ago... I don´t use a CAD system for my daily job, just an assembler. Did some 3D modelling before, but with a 3D printer it offered totally new perspectives.

Design something, print it, hold it in hands an hour later, look if it fits, improve it and print it again. Also changed the way I work totally. Before I formed everything with my hands, took a lot of time. Now I form everything virtual and don´t have to care for manufacturing anymore, just hit print. I love to hack industrial production machines. So some of the parts I printed are in everyday use for about a year and do a really good jobs. Help to produce thousands of products. Just simple parts, but they work... I use 123D and Moi3D. Moi3D is great!

@Sander: Moment of Inspiration (Moi) should also be sth. for you. It´s like useing Adobe Illustrator but only with 3 dimensions. Very intuitive and more of a designer approach to 3D modelling, than an enginnering or programming approach. They also offer a free 30 days trial.

DSM's big strength is it's push/pull feature. If you select a face there about 10 different ways to push or pull it. It's a strange way of doing things and very powerful. So threads are done with the pull feature - spiral pull:

Functional for me Sander, mainly engineering and architecture; although right now I am working on some in-soles for a sports/musculoskeletal Podiatrist and recently did some embossing plates for a digital printing company - if it earns money we will do it!

Interesting. Want to say a little bit more about the software you designed, maybe add some screenshots or so.

Seriously? I wouldn't have thought it was very interesting. Well ok, below is a sample of what I was doing. The software is calculating flame radiosity, i.e. how much heat arrives at certain points in the scene given a fire also somewhere in the scene. Jet and pool fires are handled, this example is a pool fire. The 3D aspect was peripheral, but it was considered important to understanding the calculation result (a previous effort by someone else - with no graphics - had proven impossible to understand).

I'm sure it looks very crude, but bear in mind it was the mid 90s (it was written for Windows 95), but it was a full 3D scene, freely rotateable in real time, backface removal (BSP partitioning algorithm), color and texture mapping, even a little bit of anti-aliasing though that seems to be turned off here. All of this done in C - no graphics acceleration, no third party libraries.

The scene had to be described rather than drawn, you could say a la OpenSCAD but it was dialog based, not scripted.

I've been giving serious thought to digging out some of this old code and see if I can't come up with something that renders faster than OpenSCAD for simple scripted design work.

Up until now most of it designed for laser cutting and assembling. From now on 3D printable stuff