Is the deadline today midnight, or tomorrow?

You can still submit today, and by the end of today (6pm CET) the first phase closes.

We have to discuss the entries with StudioSpass as well, but we will try to select those who enter the second phase

and communicate them by the end of today, or else tomorrow.

Globally Inspired Totems that can be turned into a pencil cup or planter.

The design possibilities are near infinite.

I decided to expand the concept of 'stick wheels'a little further.

Since kids in preschools perform a lot of works using pre-made elements, manufactured mostly through 2d printing methods (they enable kids to build precise motoric skills and hand-eye coordination as they do a lot of cutting, painting, assembling things, etc), I decided to design the elements in a way that can be incorporated in the teaching process.

Below elements can be glued to models using ordinary non-toxic glue used in preschools in wholesale quantities. (I think it's vinyl-based. Water soluble until dried, can dry in large volumes with little shrinkage, has very good adhesive and mechanic properties)

I try to never underestimate a child's ability to intuitively understand things, yet my kids always surprise me. So I decided to design systems that are fairly complex in mechanism of action, but easy to print and to use. Things that can be fun, but that will also tickle kid's imaginations.

We have a lot of wheel types and suspension systems that can be designed and easily printed in 3d. Below is a double wishbone suspension with a hubless wheel. Note: all the suspension elements can be printed as living hinges, eliminating need for axially turning elements and assembly. The rim itself is essentailly an external ring of a roller bearing. No need for a ball bearing here.

and a cutoff image to show the internals.

This element will 'just work', so can be used as a toy element (a fairly sturdy one if we use a living hinge), but it will also teach the children about motion and mechanics through painless osmosis

Now this is something more advanced, that could be used later in the education, or with parent supervision.

A wing with flaps and a screw to tighten them in desired position.

Can still be glued to objects, and the settable flaps will allow to them to fly even with heavily asymmetrical shapes. Set should also include tail wing. Optionally the wings can include a linear guide to move the wings relatively to center of mass, and can be connected to model via ball hinge (tightened with same screw) to change the geometry of the wing in any desirable axis.

and wings can be used for asymmetrical shapes:

Edit: I didn't like the initial design much, since it's purpose wasn't clear. Updated with redesigned version.

If you've ever been a child, you know how it feels when your new huge ship you assembled yourself from a construction toy set (think Lego or Cobi) does not float on water.

Well, there is a ship design paradigm that comes to the rescue! It's called SWATH: Small-waterplane-area twin hull. Essentially, you take two submarines, give them huge fins, and place a platform on top.

The bottoms of these designs are filled with water. Several of these can be attached to any object to make it float.

The elements on top are made to increase gluing area.

This design makes it capable of storing an engine inside (either electric or wound-up).

They can also have canals inside instead, connected with pipes. When water or air is blown into one central pipe, the modules exhaust it on the back, providing propulsion for the ship

Sorry for twopost, but to have everything in one message, here are the forum links to my submissions:

High hat or Set of Buildings:

Too bad there wasn't much time to work on this.. but here are some sketches of my idea:

Here is an additional sketch to my animal-creature-work.

The weasel on my first sketch has now changed into an otter sitting in front of a fish jumping out of a pond.

i thought i will not partecipate this contest until this morning

this is all i could did in the few hours ago.

the first thing i thought when i saw a 3d printer awhile back was something like "oh, what if the big inventors of the past will be alive right now"

so even after years i can't imagine what incredible minds like Leonardo, Escher, Galileo, Le Corbusier or Gutenberg (to name the ones i have some concepts in mind) would do with those technologies and how they will be again shaping the history from now on.

i think 3d printing is a real turnpager in our history whith the same both historical and everyday living value as the big inventions such as the gutenberg's moveable types which even if not directly from the technology itself but the product you make with (the books in this case of course) have change our ordinary life forever.

so that's a part of the reasons that pushed e to develop these old-modern concepts.

graphically speaking i liked the original still life and the overall high key of the images however i can't though out of low key versions of the images i had in mind.

i tryed to let peoples references trough historical representation which leads to the master's work and a now-a-day representation.

let me know what you all think about Thanks UltiArjan! It was a lot of fun to work on. Hope I will be able to see it printed!

thank you we_love_robots how would you improve them?

I just found out about this contest about 15 minutes ago. I'm hoping we can all get a bit more time to submit something? I'm in the US specifically Chicago so I only have less than 1/2 hour to design something!

I have over 10 yrs of 3d experience and experience with 3d printing as well. You can see some of my work here:

Now off to do some quick mockups hopefully in time! :???:

Also, as I am new to this forum, I need moderator approval for my early posts! Can I get this restriction lifted asap?

Also, as I am new to this forum, I need moderator approval for my early posts! Can I get this restriction lifted asap?

As for the time limit. What if it is extended and someone comes across the competition with an hour to spare on the new dead line, should it be extended again? Gotta put a limit somewhere

all items build from cubes, translating into 2d and 3d environment.

Out of time unfortunately. Only managed a very quick mockup of 1 theme. :oops:

As for the time limit. What if it is extended and someone comes across the competition with an hour to spare on the new dead line, should it be extended again? Gotta put a limit somewhere

Here's hoping my single entry & portfolio puts me through to phase 2! :roll: :cry:

Here is a Space/Astronaut theme which would also include a large rocket and UFO:

This theme is meant to show off the larger printing capabilities of the new Ultimaker 2 Extended.

Note: Figure is shown as an estimate in scale. Final product size might be different.

Help! I'm new in the community and would like to take part on the contest, but I'm not sure if i made my entry totally right. I just put some pictures and text on the gallery and tagged the fotos also with the word "contest". Is there a link where this could be more clear and direct? or is it enough what I did. Thankx. Bst. a+

May the best win! Good luck to everybody =D

@SandervG posted yesterday : "we will try to select those who enter the second phase and communicate them by the end of today, or else tomorrow."

1-They've already communicated to those who entered the second phase and neither you nor I are one of them.

2-We've to wait until tomorrow.

Ohhh. oh. I had another idea so I drew it out quickly. Not sure it makes the cutoff, but here it is anyways. This one is designed to showcase your materials. 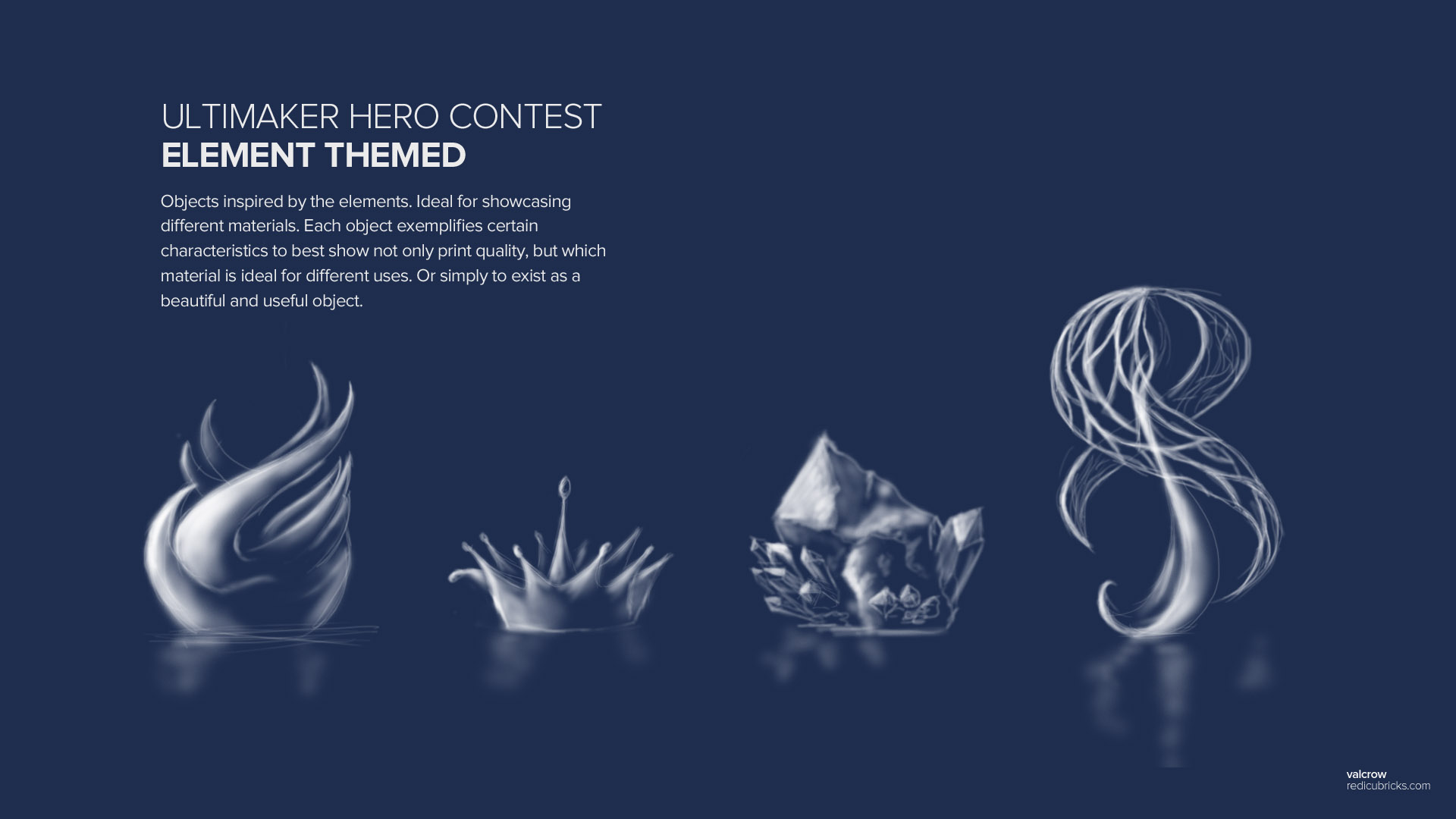 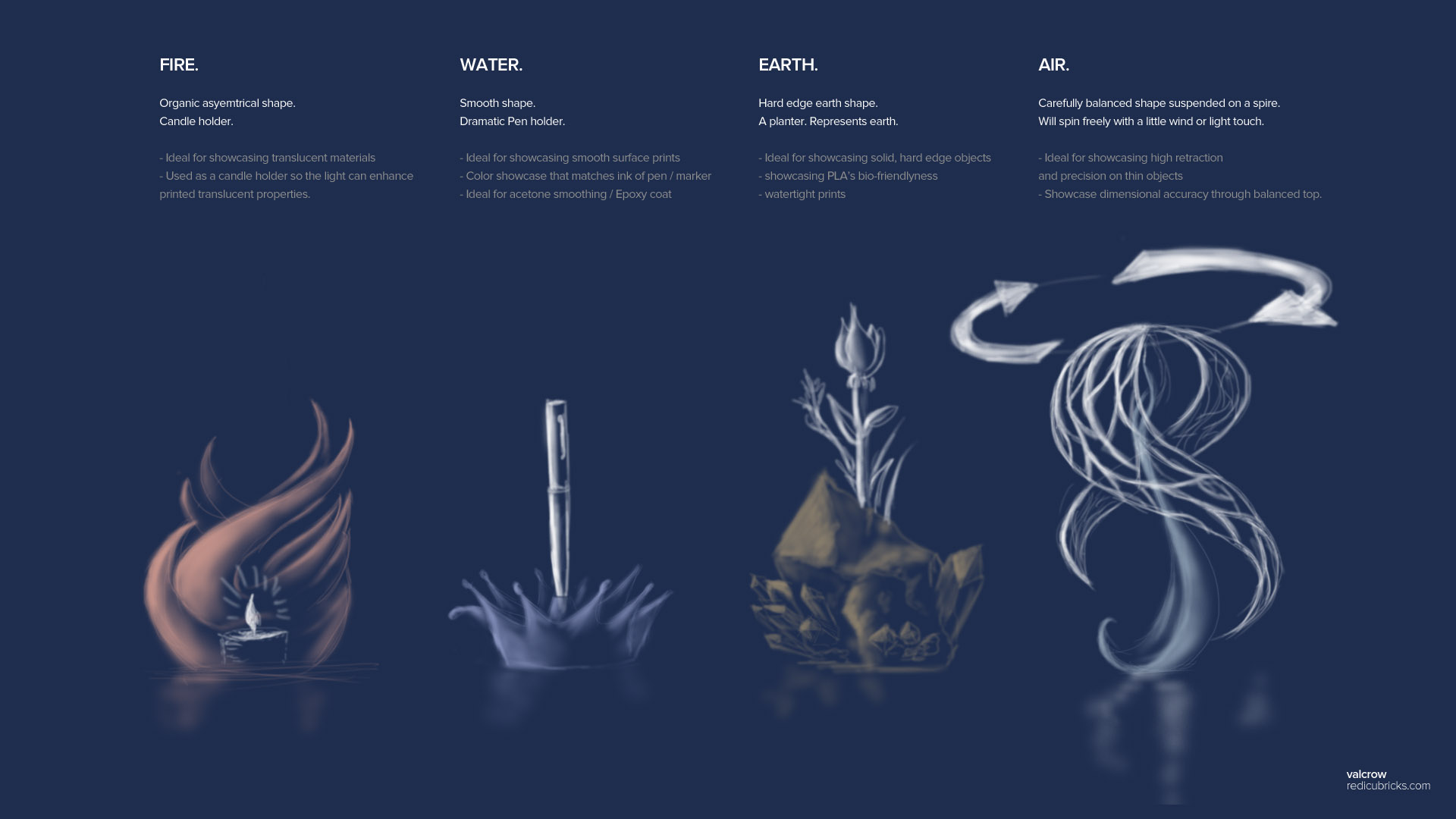 Yesterday we discussed the entries with StudioSpass and based on our mutual agreement we selected a couple of entries which will go to the 2nd phase.

Due to the professional level of entries we decided instead of selecting 3 to select 5 entries.

Unfortunately we have to draw a line somewhere and not everyone can make it to the 2nd phase.

But we want to thank everyone for taking an effort and participating in this contest, it is much appreciated.

We want to congratulate the following participants! They are mentioned in random order:

Some brief feedback to start of the next phase:

We loved your idea! Perhaps it could be interesting to play around with combining 'real' materials with 3D printed parts.

Maybe it could lead to some interesting results, maybe it won't. But it could be worth looking into.

We love your work, it looks very professional and your style is something we could work with.

We are curious to see what you will come up with for the other pages.

Great idea. We are curious to see this idea further outlined, and what you will come up with on the other pages.

We like most of your ideas, but don't see all of the ideas being relevant for the designated pages.

Lets look into those in the next steps.

We love your work, very creative. But we are looking to create more of a scene, instead of only characters.

Through your sketches we are confident you can deliver professional and creative work, and we are looking forward to see how you would progress for the next pages.

In order to stimulate diversity we suggest to keep most of the upcoming progress behind the scenes, and share the submissions in this thread before the 2nd phase ends. I will contact each participant with some further outlined feedback through email and we can go from there.

I hope everyone enjoyed participating and personally I am already very excited about what we have seen.

Congrats to the winners. There are some very skillful people in this forum. ( was hoping there where less. :-) )

Is there some contest to win a heatbed upgrade planned? Since I will stick with my Ultimaker 1 for a little longer it seems

Besides the winners, I also liked the submission from conradbenzin very much.