Different materials for the top/bottom skin

One thing to consider:

the UM2(+) does not support M600 AFAIK, but you can change the filament during a normal pause (M0).

To mimic the stacked processes of S3D one has to print one model / color after another. I don't know if this is possible (only) with post-processing?

The simple way would be to start each "layer" as a separate print, just take sure that the buildplate stays hot between the prints.

Or perhaps combine the gcode files with some scripting?

Hey, you made the firmware I am running! :D

I have finished the script, and it does what I wanted: 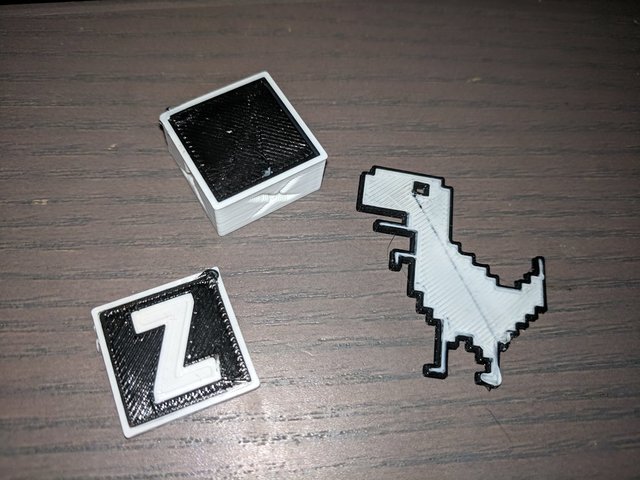 The T-rex looks a bit sad but I should be able to fix it by tuning the retraction setting.

The M600 command is ignored, but the M0 works just fine, just needed to modify the other pausing script a bit.

And it turns out finding the top layer is not so straightforward, I tried using the ";LAYER_COUNT" value-1 but that gives a bigger number sometimes, using "data[-1]" just give me M107 and the things after. I end up going backward in the data and just use the first layer I found.

If anyone want to try it here's the script: