Set infill to 100% Go to Expert tab and select Expert settings... At bottom left under Infill do not check the box for Solid Infill Top.

Sorry it was late when I posted and my brain was not engaged. What I said may work. But it is not really the solution because I do not understand why Cura would do that. If you want to send me your STL file I will have a look.

Do you have any of the a-b combinations on ?

in your case I think they should both be off 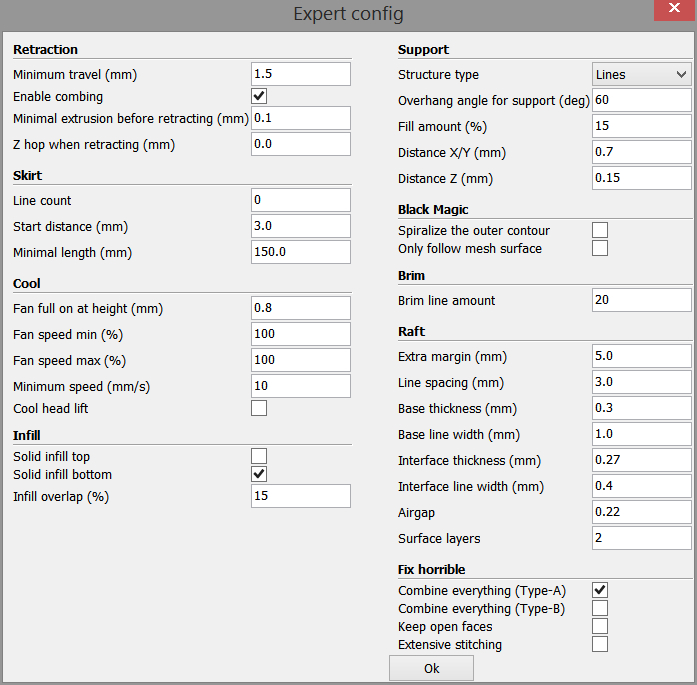 Thanks for the advice, turning both a-b off results in this error though. Any other thoughts? Thanks

OK I loaded you .obj fie into Cura 14.07. Probably a different version to you and I got a different result, albeit wrong

I then loaded the .obj file into Meshmixer and ran Inspector

No idea what all those pointers are but presumable errors.

(edited to correct the picture)

I tried loading the .obj file and that loaded successfully. Doing a health check though reported that the mesh was not closed and was not orientable.

In the background whilst all this was going on, I had loaded the STL file into Repetier Host; it was hung during or at the end of the intersection tests.

I tried fixing the model in both Meshmixer and Netfabb but failed. Playing around with meshes is not my strong suite – hopefully someone else can help!

I loaded the mesh into InStep which reported 7,545 errors including 1950 pierced facets, 4000+ unattached edges.

There are 122 bodies in the mesh. I am guessing that all the bits of corn are separate bodies and where thay have all been joined together, it has not gone very well.

Cura's X-Ray view will most likely help you idenfiying the issue as well.