First Layer Not Adhering to Rest of Print

I'd like to see what it looks like before you tried to remove the part.  I want to see if there is clear underextrusion on layer 2.

Cura changes several things on the lower levels: fan, speed, layer height.  It could be that on the second layer the combination of those values is bad but by a higher level it recovers.

Or you could have bad layer adhesion (I've never heard of this with pla.  Never!  but it's quite common with all higher temp filaments which is basically all filaments other than PLA).

You said this is wood fill PLA?

Leveling the bed doesn't affect 2nd layer much - mostly it should only affect the bottom layer.  Certainly by the time you are on the 3rd level, leveling shouldn't make any difference.  If you level bed too high, the bottom layer gets squished a lot, then the second layer hardly at all and the 3rd layer is fully in a steady state.  If you level bed too low the bottom layer is underextruded and might not stick at all and might not be the right shape, then the second layer recovers mostly and by the 3rd layer it should be fine.

By the way I prefer to level such that I get that elephants foot thing but I set "initial horizontal expansion" to -0.3 to counteract the elephants foot thing.  This does not work well with certain shapes (like teeth of gears will almost disappear on the bottom level) but it's my default setting for 90% of prints.

I'll have to snap a pic while it's printing the second layer.

I'm not sure about bed adhesion, I'm using a PEI sheet and the heated bed is on as well. So the prints seem to stick fine as long as I wipe it down with IPA regularly.

Yes, for the printed items in the pics, that is wood fill PLA. Is "initial horizontal expansion" a setting in Cura? I will definitely look into that. I normally print with a slight elephant foot as well, but for these dice I was trying to avoid that.

Managed to get a pic right after the 2nd layer finished. Doesn’t appear to be any underextruding going on... must be an intermittent issue or something. The cube came out fine after a slight nozzle height adjustment and I also tried the “initial horizontal expansion” setting in Cura like GR5 suggested. 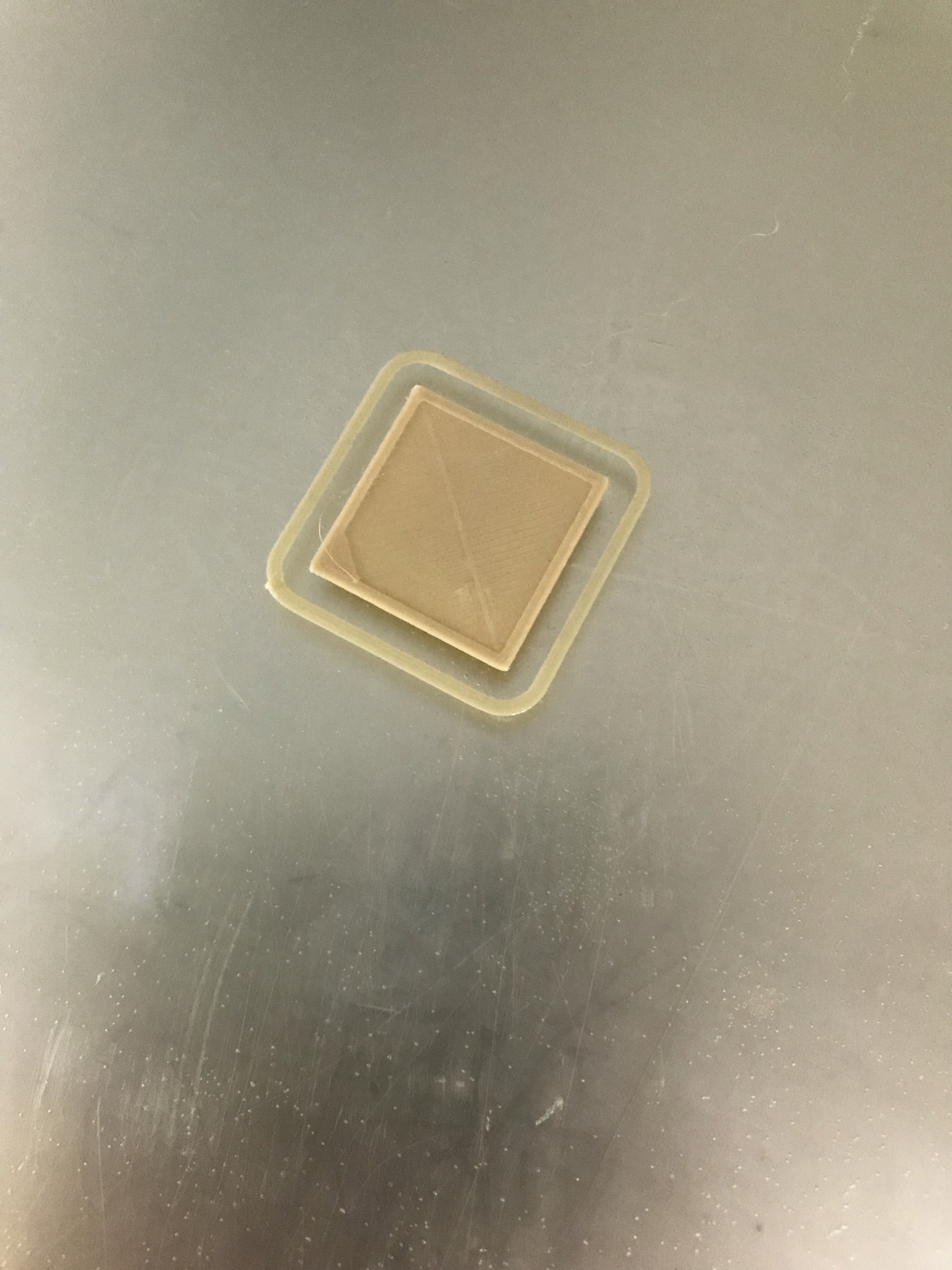 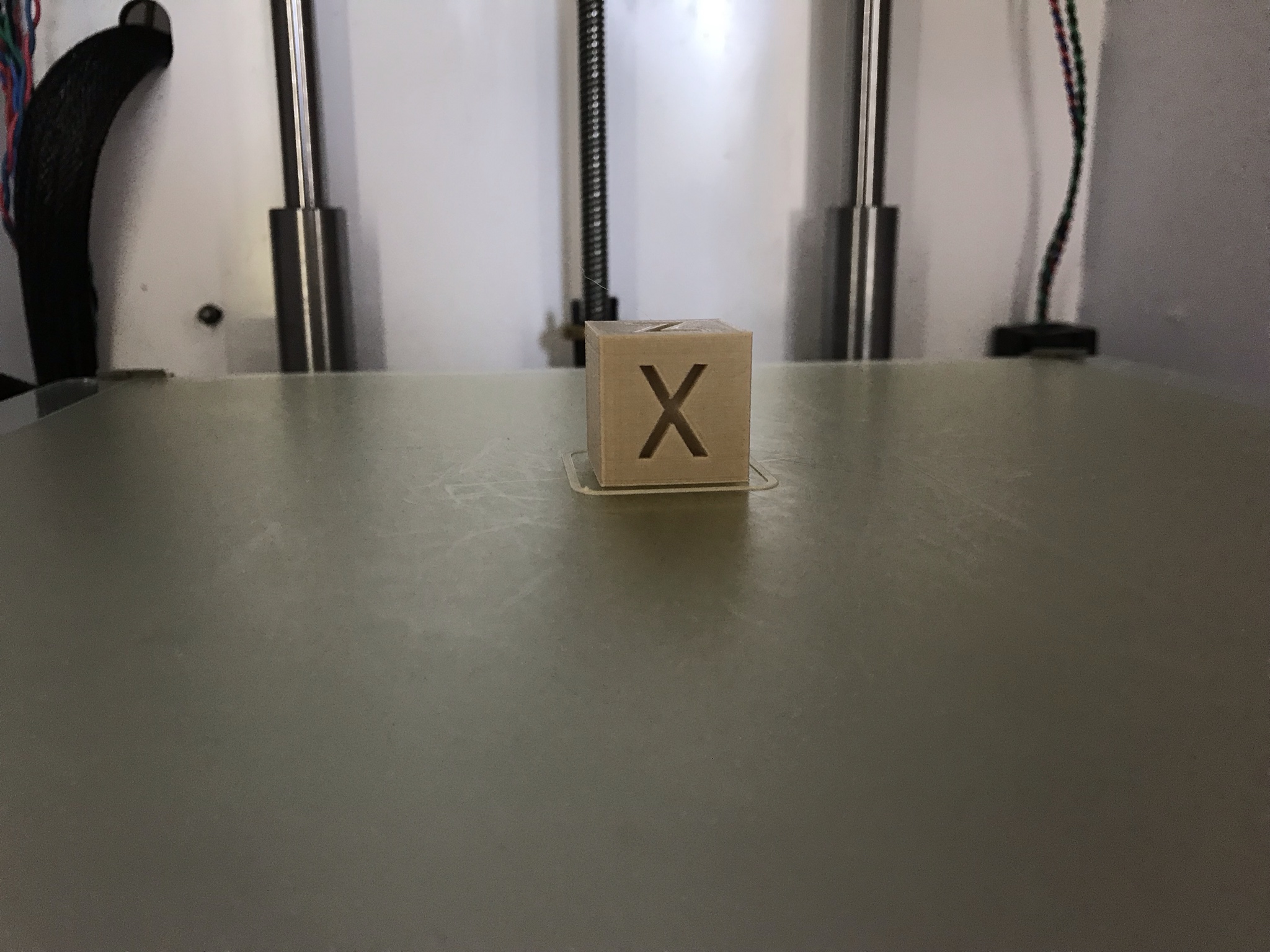 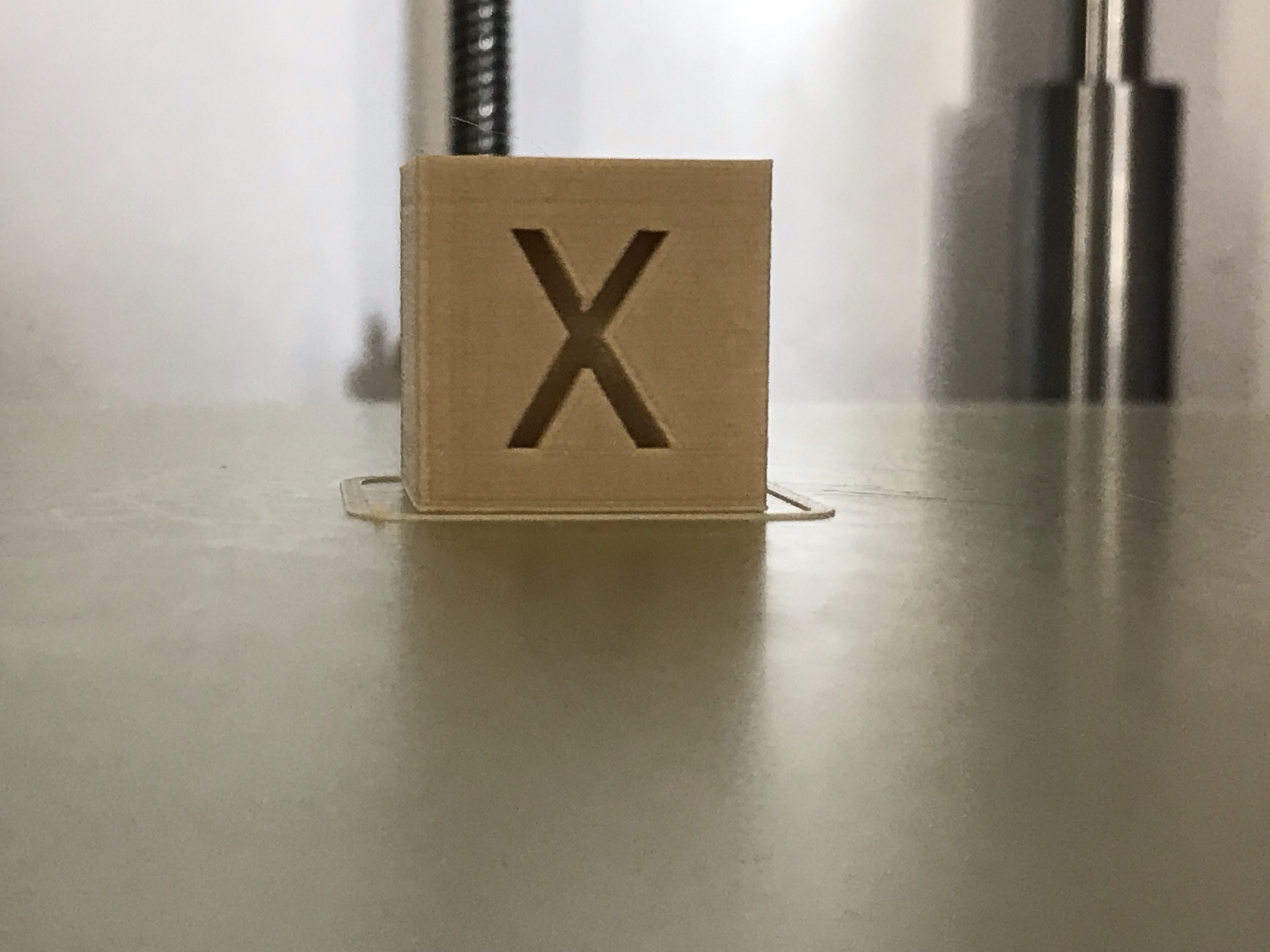 Layer 2 looks fantastic.  But a few layers later - maybe lary 5?  10?  Not sure but it looks underextruded.

For this to only happen 1mm or so above the bed implies it's probably something with the Z control.  The bed is probably not moving far enough on some layers and then moving too far on other layers.  When it doesn't move enough you get slight over extrusion and then when it moves too much you have a gap with underextrusion.

There's a small possibility this is a temperature issue as well but I doubt it as the second layer looks great.  The fan comes on at the begining of the second layer and the temperature sometimes drops and you might get a little underextrusion but this looks much worse than typical.

I would try cleaning the Z screw.  Especially near the top (where it's in the Z nut while printing the first mm of your parts).  If this didn't used to do this then it's likely dirt.  Note that the screw thread is triple helix so putting your fingernail or a qtip or something in one thread is great but you have to make sure you get all 3 threads.

I quick test is to use a fingernail or popsicle stick or something covered with a tissue or napkin or something - stick it in the thread and then push the bed down which will get it to spin.  Remove as much grease as you can.

If you only clean the top half of the thread then there is no need to add more grease.  One pea sized drop is plenty for the entire thread.

If you want to clean it extra well, it's pretty easy to remove the 4 screws on the bottom of the printer that hold the z stepper in, also remove the Z stepper cable from the circuit board and then pull the Z screw (it's permanently attached to the stepper) out through the bottom.  Spray with WD40 and clean with rags (or paper towels).  After it's completely clean add just one pea sized drop of that green grease that comes in a little tube with your Ultimaker.

For what it's worth, the z-screw has an anti-backlash nut that was added by the previous owner. The z-screw had no grease on it(!) when I bought it and greased it maybe 1-2 months ago. But definitely had more than one pea sized amount on the entire thread. I went ahead and cleaned the screw and went a little lighter on the grease this time.

Just an update, this seems to be more material dependent. I normally print with eSun PLA+ and that seems to have the slight under extrusion at the 3rd or so layer. However, the wood PLA shown above prints fine. Maybe it is a temperature issue, PLA+ has a recommended print temp of 205-225C.

There's a small possibility this is a temperature issue as well but I doubt it as the second layer looks great.  The fan comes on at the begining of the second layer and the temperature sometimes drops and you might get a little underextrusion but this looks much worse than typical.

I've been looking into this more and found the "fan at full height" setting. I wonder if this has anything to do with it?  As in the layer is turning on at 100% at the second layer and subsequently cooling the hot end slightly causing an underextrusion. Unless it's already enabled. I do have Cura 4.0 as my slicer, will need to look into this setting some more.

Note that the problem might still be there with wood fill as wood fill is good at hiring layer lines and imperfections like this.

I still suspect it's something with the Z screw.  Try tightening the 3 leveling screws the same amount - quite a bit - maybe 5 full turns.  If the problem then moves up 5 or 10 layers then it was the screw.

Note that the problem might still be there with wood fill as wood fill is good at hiring layer lines and imperfections like this.

I still suspect it's something with the Z screw.  Try tightening the 3 leveling screws the same amount - quite a bit - maybe 5 full turns.  If the problem then moves up 5 or 10 layers then it was the screw.

I see. I will definitely play around a bit and see what I find. Since I first made this thread, I replaced the PTFE coupler with a TFM one. So that may have causing an issue as well.