Here is a view of the other part of the gear, which came out well using the same settings, taking about 6 hours to print.

:cool: Well you have described it ...

Below my unprofessional and non-binding opinion:

- Right, the basic object shown in Cura looks as if it were not for the 3D printing optimized.

- Some say UM-PLA-blue is no good, try it once with other available material.

- Your worm-screw looks generally made after insufficient or uneven amount of material. Only the beginning and the end of the spiral should be sharp, but not the coils.

- Give it a try and use a Little bit more flow.

- Prints two objects at once, even if you only need one, then the individual layers have more time to cool down.

- If less material per layer used, it rolls up probably less high, especially in combination with the other methods.

- When printing two identical objects at the same time can cause lint due to the head-trip. But this lint can be removed more easily, as opposed to possible distortions of the objects.

- There are ways to print on a cold platform, which could be helpful in complicated overhangs.

Try printing it with fresh glue stick and the bed heater turned off.

PLA will usually stick just fine on a cold glass bed, and there is no point in heating it at the bottom while you are trying to cool it just above the bed.

I don't think that the heated bed has a big influence. The lowest surface (close to the bed) looks identical to the upper ones.

It's simply the nearly horizontal orientation of the surfaces. IMHO you can't get it much better without support or cutting the object into two parts (along the axis).

Weird, your printed part looks a lot different to your cad model. I think you should be able to get better results than that. I have printed some threads with quite good success. I would try printing two at the same time and slow the print down a bit. It`s horrible I know, but sometimes we have to be patient

I have had to test to print this object.

Without support and in one piece, I can't get better quality than your first photo.

I have tried different support types (meshmixer, Cura-Lines and Cura-Grid), but the resulting surfaces are always to uggly and the shape doesn't come close to the CAD-file.

The only good result I can get is by cutting the object in two halfs (along the main axis). And glue them together.

I have added some support in meshmixer, but I think that was not necessary. Lost some of the support structures during the print.

Some comparison with surfaces printed as one piece (Meshmixer support, no support, cura_lines, Cura grid):

Some more photos in my Album for this test:

@Conz: wow, you did a lot of work to try this out; thank you for your efforts on this project! Yes, splitting it in two and printing horizontally definitely gave the best profile.

However after mounting it on a drill press and doing a lot of sandpaper work to smooth it down, then running it against the matching gear, it seems usable.

(These are all the same parts, even though the color looks quite different depending on the lighting.)

And by the way, if anyone just wants a similar gear and doesn't want to print it, you can buy such things as replacement parts for a garage door opener, for example 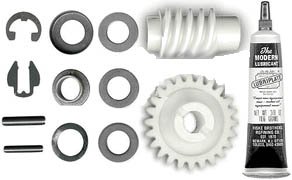 You should throw this one in the Monthly Print Challenge (MPC) and see what people can do with it...