Yet another homemade Ultimaker clone! :) (work in progress!)

By rafael-matsunaga
April 25, 2013 in Coffee corner

Yes--I wish you luck, Red! I wish I had the time to build my own UM. I noticed this from your blog:

Everything came from printers, the 12mm rods are actually 11.90mm wide, not perfect, but those should do for now.

Can you find some bearings or bushings to fit these rods? 0.100 mm is actually a lot of play, when you consider that the UM is capable of printing layer thicknesses well below 100 microns (and I usually do!).

Given the scope of the project and the potential to have a machine that's even better than machines built from the kits, I think I'd spend more and get rods that fit the bearings/bushings very well.

BTW, the chrome plated rods in the kit are very high quality but, if I were building from scratch, I'd match the end quality at lower cost by using drill rod and a good low friction and wear-resistant conversion coating.

Hi, thanks for the feedback, Cal!

I already had some LM12UU bearings and there's indeed some noticeable play with those rods. I've had little luck with my local hardware sources for smooth rods, though. I'll keep looking for sure!

But even if I end up assembling the whole thing with less than ideal parts at first, I expect to learn more as I replace those parts. We'll see!

Finally got my lasercut parts made at a local shop, but unfortunately I had to go with MDF for the 6mm parts, which proved to be a bit soft.

But I now have a Z-stage, although I'm still missing the spring assembly for the bed.

The next assembly is probably a week or two away, while I wait for more parts to arrive. Get the kit if you can, kids, waiting is not fun. The frame is now ready, but it's still missing the motors, as I'm waiting for my short belts. I also need to assemble the connectors on the motors, since I bought motors without any kind of connectors, just loose wires.

Quick update about the Z rods: the junkyard 11.9mm rods seem to be enough (although surely not ideal) to do the job. The distance between the holes that hold the rods in the frame is smaller than the distance between the linear bearings on the stage, as noted in the comments of the revision 3 build instructions, so they are pulled against each other by the bed assembly, and as a result, the bed is very sturdy, with no play around the leadscrew. There is little play in the X axis, meaning I can lift the front end of the bed a little, but since the weight of the bed holds that in place, I don't expect any problems to arise from that.

Hi, it's been a while, but I finally have all the parts I need and there's not much more assembly to do! There is, however, some troubleshooting to do. There's a LOT of resistance moving the print head manually. Trying to move it I end up pushing the whole printer and the motors can't quite move it. I turned up the trimpots on the stepper drivers a bit and got some movement, but just a few centimeters, then I get humming or a loud sound as the motors try to move.

Without the printhead installed, I get smooth movement on the axes, so I suspect something is misaligned. I squared the axes as best as I could, but that made little difference.

I'm a bit frustrated, but excited to troubleshoot it some more tomorrow!

Good luck with the troubleshooting. You should be able to move the print head with fairly light fingertip pressure on both sliding blocks in a pair at the same time. Anything more than that, and you're going to start having problems during printing - brute force is unlikely to be a viable long term solution.

>Finally got my lasercut parts made at a local shop, but unfortunately I had to go

>with MDF for the 6mm parts, which proved to be a bit soft.

What? Too lazy to make your own 6mm plywood?

You've probably already considered these items but does the head have the same high resistance in both X and Y directions?

What happens when you remove the short belts (or just let the pulleys spin freely on their shafts)? How about the same for the long belts? Make sure the head moves very freely without belts and then add the belts. It's easy to have something rub on a belt near a pulley, like a stepper motor wire, and cause resistance.

You've made great progress. Quite an accomplishment!

Hi, thanks for the encouragement and help!

What? Too lazy to make your own 6mm plywood?

But hey, given the terrible quality of plywood I found here, I'm pretty positive I could make better stuff.

Okay, so I made some more tests with the X/Y assembly. Yes, the resistance is pretty much the same in both axis. There was some belt misalignment and that accounted for some of the friction, but it's still not anywhere near acceptable.

Loosening the short belt pulleys made little difference, so it's not the motors, either. Without the belts, the sliding blocks slide quite well. I also tried removing the shaft endcaps and that didn't solve the problem.

I said it was fine without the head, but it is not! It's only smooth without the long belts.

I suspect it may be because of overtensioned long belts. I went with 298MXL instead of 300MXL after reading a lot of belt slack posts (and today I found a couple of posts that said 298 was too tight, haha). They don't seem excessively tight, compared to some tensioning videos, but I can't think of much else.

I'll remove one of the long belts and see if that lessens the friction (do I really need two on each axis?)

Okay, there seem to be a couple of friction sources friction in the machine. One end of a shaft was rubbing a bit against the cap. I've removed all the caps for the time being.

The shafts rotate effortlessly without any belts. With the long belts on, there's some friction. The friction also gets worse when the short belt is on and the X/Y motors are pulled down. That's the most significant source, I believe.

So the problem seems to be that my bearings don't perform too well under the radial load of the belts pulling the shaft down and to the sides. Or there's still something else I haven't realized yet.

Well, look who's dreaming about printing a calibration cube!

After blaming everything on top of the machine for the friction preventing the head from moving, I finally found the true culprit: the 6mm cross bars. Turns out they were 1mm too long, and when they were pushed into place by the C block bolts they got too tight and pushed the 8mm bars outward, bowing them out slightly. Perks of self-sourcing.

I filed down those rods, and now everything moves!

It's still not butter-smooth, but for the time being I'm quite happy with the motors being able to move the print head. I'll have some filament to do a proper test in a couple of days, but I'm still cautiously optimistic, as the feeder mechanism may have some unexpected problem.

out of all things, if I would build an UM from scratch, I would have totally nixed the z stage, and designed a better one...

Well, look at that, it works! I had to adjust the Z steps on Marlin thanks to my non-standard lead screw, but other than that, it looks fine.

The main issue I have now is some underextrusion, from what I can tell, there's not enough pressure from the spring (it's a spring from the junkyard). I'll try a stronger spring later.

Yay! Welcome to the Working Printers Club!! :-) It could be the spring, could be your steps-per-e setting.

congratulation! And it sounds much more quiet than my ultimaker

out of all things, if I would build an UM from scratch, I would have totally nixed the z stage, and designed a better one...

Actually, I'm quite convinced the current Z stage issues can be fixed with a few drops of wood glue. (due to experience with my own machine and a slight manufacturing mistake on that one, causing the platform to be super resistant to needing calibration)

Hmm, I'm not sure how quiet it is compared to a real Ultimaker. It's quieter than a dot matrix printer, but my wife doesn't agree that it is quiet at all.

Maybe MDF is better than plywood at dampening noises?

The extrusion problem is now fixed by increasing the flow rate (will probably adjust the E steps in Marlin later). I suspect I need to do that because the diameter of my hobbed bolt's teeth area is smaller than the stock knurled part, thus pushing less material per step? 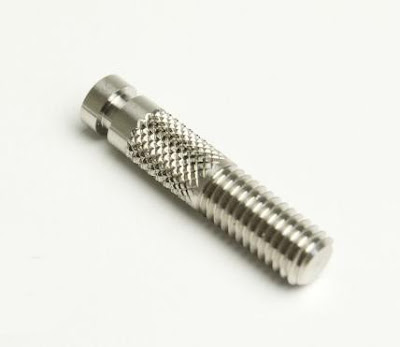 I noticed my prints are a tad smaller than they should. Smaller on the Y axis than on X, too. Could be lack of belt tension?