Sorry for my late reply. I am a little bit busy at the moment...

I re-worked the right fan duct. Now it aims a little lower and has to be bolted onto the hot end. Use two M3 nuts and assemble the new fan duct to the very long bolts at the hot end. 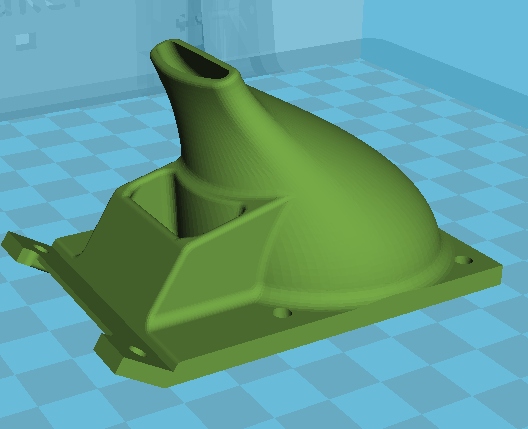 I have not printed and tested this fan duct yet. Do not know it it fits - so you might give it a try and see if it works for you.

I hope I can re-model the left fan duct during the next weekend.

Wow thanks man! I gave up all hope because no one replied :wink:

I'm going to print this fanduct and see how the results are. I think I'll add a rectangle to connect the two suspension pieces to make it thicker. Because this piece gets easily fatigued due to the vibrations. I can do that myself in TinkerCad

Today I did some modifications to my left fan duct. The air stream is lowered and you have to bolt it to the hot end. 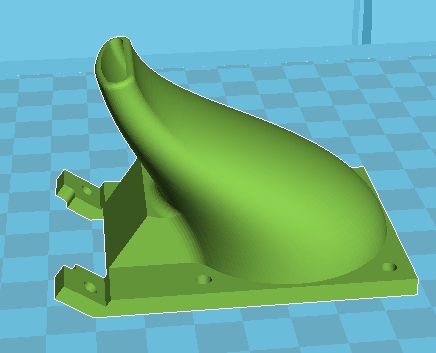 I have not tested this new fan duct yet, maybe it is what you are looking for.

It looks like the exit area is quite small compared to the intake area of the fan. I remember seeing discussions in the past that these sort of designs didn't work well because the standard 40mm square CPU cooler fans aren't capable of sustaining the necessary pressure to handle much reduction in output area. Does it work ok, in practice for you?

Do you have any results showing the improved print quality that these designs makes possible?

I do not know if 40mm fans cannot handle the pressure as I am using the original 50mm fans. For me the original fan size is the perfect match for my fan duct design.

I am working with these ducts for half a year now without any problems. And I am quite pleased with the results: 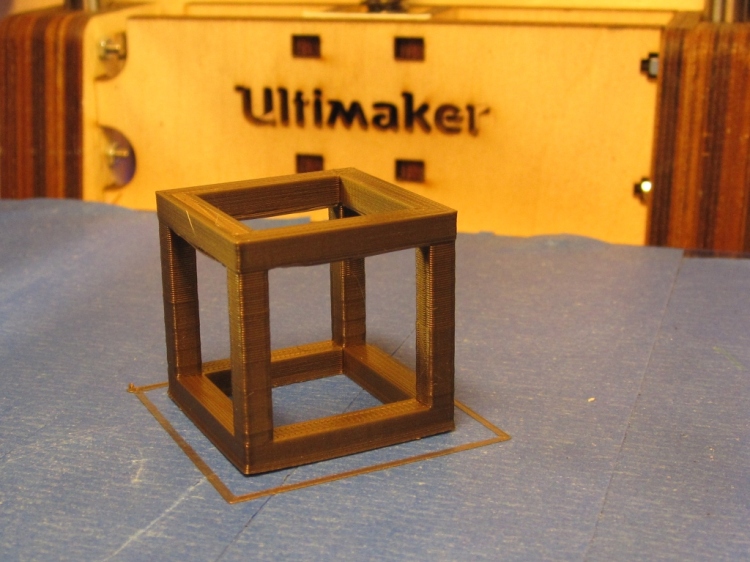 This is an early model to test overhangs. 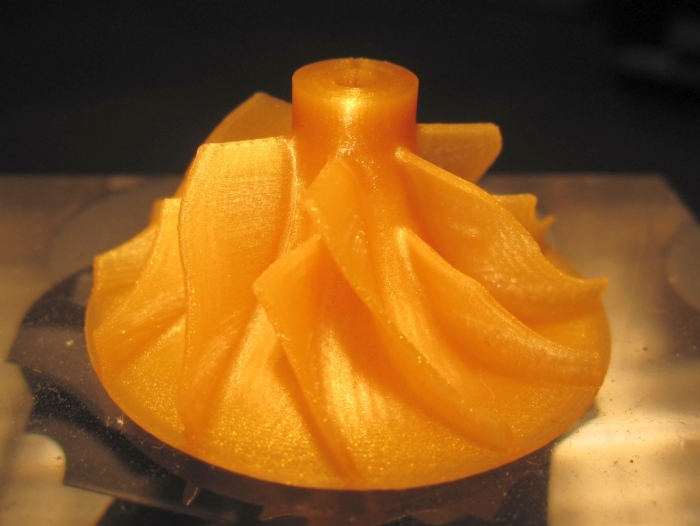 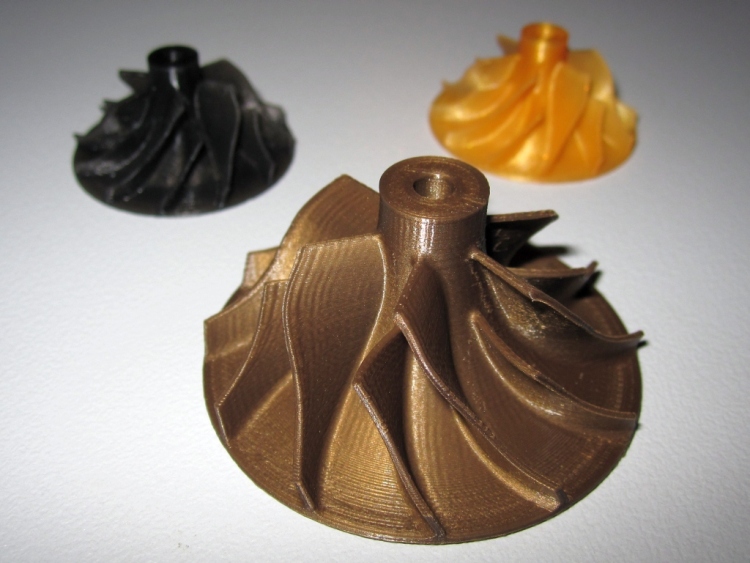 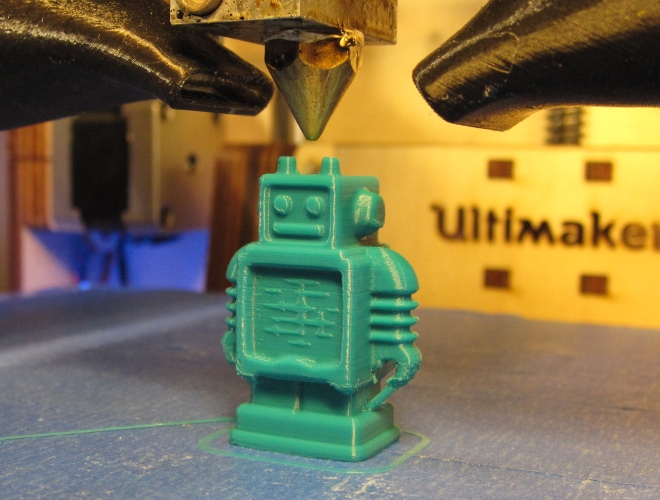 The UM-Robot - the hands could be better

So I tried printing this off for my ultimaker. I'm not really sure what the difference is, I think mines a revision 3 ultimaker so it didn't quite fit properly.

It made contact with the hot end when fully pushed in. And prevented the print head from moving to zero because the fan hit the slider block, and then the screw on the slider block causes lots of friction on the part that mounts to the long screw.

I managed to use it kinda hanging on a thread.. Functionally it seems pretty good!

So I redesigned one based on these dimensions and the problems I encountered:

The duct is more direct, nozzel a little smaller. (wasn't intentional.. just happened that way) and a bit thinner everywhere.. but it pretty much fits perfectly on mine now without hitting the fan, screws or hot end.

You mentioned you wanted it a bit lower, this is about 0.8cm lower, and the fan is angled by another 5-10 degrees. Feel free to try if it helps. Here are some pics.

blecheimer's design still looks cooler though I think.. Mine could use a bit more polygons bubblyness and fillets.. but alas, I'm using artist software which makes all that stuff difficult.

I was re-thinking my design and made a rough sketch of the V2 hotend. This allowed me to adjust the position and the air flow of the fan ducts:

As I am still not using the new hotend I do not kown if this new design really works. Feel free to download the V2 fan ducts and give it a try.

Sweet! I can try that one when mine melts.. I think mines a bit too thin seems a tad flimsy.

I imported your v2 to compare, I think it'll fix pretty much all those issues I had earlier, except the fan might still hit the sliderblock.

Awesome design btw. I don't know if I could have printed mine properly without using yours ironically. Hope you don't mind me bastardizing your design.

Yes, it will hit the slider. I have just cut the fan casing a little bit and now it fits nice and easy.

Hope you don't mind me bastardizing your design.

I'd like to see modification of my design. Just take it and improve it.

Oh yes, I totally forgot that that was one of the main reasons I'd like to modify the ducts. But I cut of som of the housing of the fans to that they would fit under the blocks... let's just say that it works ;-)

Using it with http://www.thingiverse.com/thing:45236, so the fan's don't toch the bushing blocks.

Thank you for sharing !

I'm currently trying to design a sheet metal version for 4pc. of 25x25mm fans (2each side) similar to UM2 but I have seriouse problems in design.

I like your design and would like to give it a try but also with those small 25x25mm fans (2 each side).

Could you do me a favor and give me some assistance in modifying your design?

Sure, how can I help?

My plan is to mount two fans each side, so I thought about modifying your ducts fan mounts to have a base of 25x50mm with 8 holes for screwing the fans (holes are symetric and have a distance of 20x20mm on each fan) and cut the duct shape accordingly. Unfortunatly I'm currently out so I can't make a scetch as i'm writing on my phone :-(

What do you think - would this be feasible? Could you give me a helping hand modifying your ducts?

I do not know how efficient these small fans will work, but, yes, this design should be feasible in general.

However it will be a complete redesign.

You need a two-in-one fan duct for each side. My design cannot be modified in a simple way to support two fans unless you develope an (quite ugly) adapter that is bolted to the inlet. 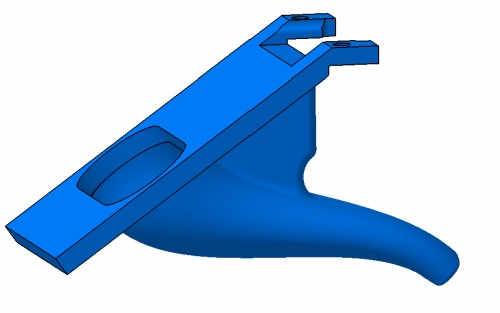 Maybe this is a suitable basis for your design.

GREAT!! Thank you very much, thats pretty good for my tests. I'm also not sure how the fans will work so lets give it a try :-)

B.t.w. What software do you use for modelling?

could you please do me a second favor and modify also the right one? I#d like to print both at once to test the behavior with 4 fans at the same time - the quick and dirty one is perfect :-)

I am quite busy at the moment, so you have to wait until nex weekend. Then I can work on the right fan duct.

As I am a professional engineer and running a small business I am using Catia V5 (for more than 14 years now) for my models. But I cannot recommend it for private use because it is very (!) expensive.

Thank you again for your support and assistance! I really appreciate this!

God, Catia... never used it. I learned AutoCAD and SolidWorks several years ago but had no chance to stay up to date so most of my knowledge is gone :-(

I am fortunate to have a little scraped Catia V5. It's a nice tool.

I still have a little trouble with obenir for what I want. But overall I'm doing! For cons, I'm not an engineer. I am self-taught.

The only learning that I could get was in Autocad there a year ago.

It's a beautiful project, your fan! At least I see that I am not alone slicer modeling in Catia.

Don't know if it's useful to you, but I updated my initial design based on blecheimer's design to this new one. Not quite as pretty as Blecheimer's but fits without modification for me.

you can grab it here: 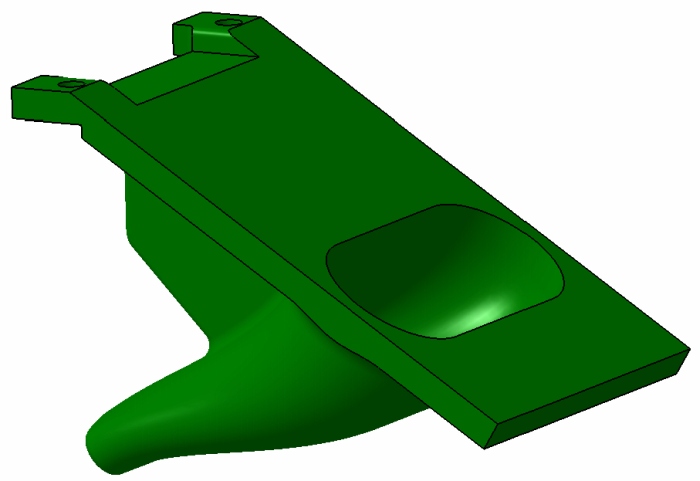 I will post my results as soon I have tested it.