Hi and welcome to the forum.

Were there any error messages in your UltiController when you returned to your Ultimaker?

I would suggest to check all the pulleys in your Ultimaker, make sure the set screws are all nice and tight. Remember, there are 12 of them, don't forget the ones on the X and Y motor.

While you are at it, make sure the short belts are tight.

Alternatively, it could be an error in your end stop, but that should probably trigger an error message.

I used to get this from time to time and sewing oil solved it for me, just lube up all the horizontal rods and see if that helps. You probably have dry rods and loose pullies. lube helps, but it means something is rubbing.

I will try out your suggestions and get back to you.

This is a common problem. Sander has the answer.

Sewing oil is a temporary solution that works if you just want a few more prints before doing your maintenance.

So we tried all of that, and we are still having issues.

- Detached X/Y motors to get to said screws

- Set pulleys on X/Y motors, loosely attached motors back on to frame

- Set Motor pulleys on top rods, checking for alignment with pulleys on motors.

- Starting on one side, squared axis using the wooden spacers, tightened pulleys

- Continued on the other three sides

- Confirmed that all four sides were square

- Tightened down the X/Y motors to tighten belt

- Added the spring belt tensioners included in the kit (I didn't recognize what they were when I first put the printer together).

- Slowed down the print speed to 60 mm/s

And we got this result: As an observation, one of the belt tensioners looks like it may be interacting with one of the sliding blocks attached to the same belt. This is the same belt that is having slipping issues. We tried to move the pulleys to give some more room, but it looks like the block pulls the belt back towards this rubbing point. You can see the interaction below: To answer SandervG's question, there was no indication on the controller that anything had happened.

Any other ideas on how to troubleshoot this? I appreciate all of the suggestions so far.

Did you check that the belts and shafts are perfectly aligned? I mean that the belt must be in the center of the shaft that goes near. This way you make sure that the belt it's centered to the pulley so it can't slip on the sides (it should do a ticktick sound if it's bad aligned).

Also, check that there isn't any oil on the belts.

I was never able to set that springs (after the second bloody cut), I did give up and changed to gt2.

I think so, but I will check that now.

Just to clarify, the belt should be either directly above or directly below the rod for the 'other' axis. Center of the belt under/above center of the rod. I'll check it and take some photos.

Thanks for the idea. 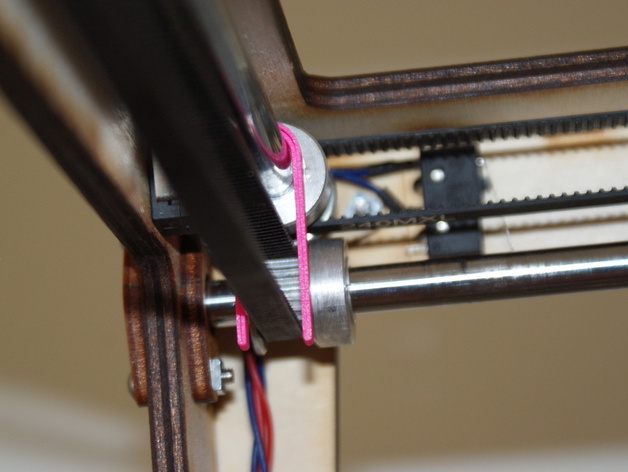 An image worth a long speech

I use an allen key to check it, but this works:

Also IMO plan for the future to upgrade to gt2. The pulleys have 2 screw points and they don't need a belt tensioner (6 months in use without any problem and the tension it's still perfect). Also you print a tinny little bit better. And I print a lot always with 180-200mm/s travel speed. Once I got a x misaligned print but was because a drop of oil fall on them. Also they are cheap so you can get a full replacement for a rainy day.

So I just checked the alignment of the pulleys/belts with the other axis. They all look good with the exception of the back left pulley on the Y axis rod. It is pushing the belt slightly inward (which is most likely what is causing the belt tensioner to rub the block). The pulley that goes to the stepper motor and the first pulley with the belt going to the front of the machine are touching and thus cannot move to adjust the belt. The stepper motor pulley is just about touching the frame, so I don't want to move both of them over.

Attached is what the set up looks like. I know pictures are hard for this type of thing. In terms of the sound you describe, moving the print head around does not make any noticeable sound. If it would help I can upload a video. I will look in to ordering the GT2 belts/pulleys. Do you have any suggested vendors?

Weird if it's all good. Check the sideblocks are all well screw and not doing anything weird.

I got them on aliexpress:

One important think to do. Use a marker and 'mark' a point in the pulley and rod. This way when your print fails, you can stop all the power and check what pulley/shaft moved wrong. Maybe it's just a little screw that has oil and can't get a firm grip.

Since the misalignment is so erratic maybe it is not the pulleys or the set screw.

Maybe an end stop is interfering. Could you check if a wire is caught between a pulley, a motor or anything else which may cause a short circuit or triggers it?

Looking at the offset on the image, I would first investigate the endstop which is on your front left.

Well it looks like a Y axis problem (the one that moves the head towards the front and back). Do you agree? So you only have to check the Y end stops and the Y pulleys and the Y belts.

90% of the time this problem is one of the pulley set screws are too loose - you have to tighten the hell out of those screws - enough that the tool twists a little!

The other items that concern me quite a bit is that belt tensioner on the Y axis that you mention. You should remove that for a few prints just to see if the problem still happens -- or maybe that's the only proglem.

The final item that conerns me is the Y stepper (rear left corner). You want the pulley slid along the axis as close as possible to the motor without touching the motor. This is to keep the belt from touching the wood even slightly. If it *is* touching you can detect this 2 ways - you may see rubber dust accumulating in the area or below the area. Also when you see the motor switch directions on the Y axis you can see the belt twist different ways each time back and forth. Whereas the other axis is fine. Instead of moving the pulley closer to the motor (without touching the motor) you could alternatively add a washer under each standoff to move the motor 1mm farther from the wood.