How do i replace the temperature sensor?

First of all you can get cheaper stuff from 3dsolex and good quality.  Also please indicate what country you are in by setting that in your profile settings. It matters as to the answers of many questions.

You definitely do not have to take any panels apart. First remove the bottom cover - it's held in by 2 screws. Then remove the old temperature connector and notice where it was connected. You will probably want to remove the 4 screws holding that board in place - the 4th screw head is *under* one of the motor covers so you should probably remove that also - to do so first push the bed all the way down. There is either one or two screws depending how old your printer is.

This should all be straightforward.

Now to run the new cable. I would probably just run it on the outside and tie wrap it. But some people use the old temp sensor cable to string through the new temp sensor cable (tape together, pull it through).

Thank you so much. I'll give it a try soon and let you know. I'll also update my country....manana!

Make sure the new sensor slips in easily into the new block, if it doesn't you should check that the sensor is perfectly round and not deformed. You might also want to consider making the hole larger with a 3mm drill and/or drilling a tiny hole from the front of the block so that you can push it out later with a pin.

Also don't over tighten the set screw that holds the heater and sensor in place, tightening it too hard can deform the metal can of the sensor making it more difficult to remove.

For future reference. I've had good luck removing temp sensor by using a small pick to push the end of the metal can in on itself so that it doesn't grip onto the walls of the block. The last five or so sensors I've removed have survived that way (now watch me fail on the next one...)

I've enlarged the 3mm hole slightly using a drill bit of almost any size but preferably close to 3mm or a little smaller.  You make a circular motion such that the sides of the drill touch the sides of the hole and this will remove very tiny amounts of material.  At high speed it only takes maybe 10 seconds for my dull drill bits to make a tight hole into a perfect hole.

Thanks for this advice...block and sensor dones as suggested.

However can you explain how i unplug the old sensor and plug the new one in ?

The UM2 does not come with a tool for unscrewing the 2 screws underneath the board and i have run out of options.

On a side note...i cant believe i have been working on an underextrusion problem for almost a month after using a wood filament. Cleaned (atomic method 50+ times, replace nozel.......rebuilt feeder ....destroyed sensor...pay stupid $$ for a new one , can't install... how do ultimaker ever expect to go mainstream when even someone who is brave enough to disassemble their UM2 is faced with problem after problem...which UM then charges a F&%^ Shi%^ load for. ) Pissed as you can tell after spending more than 2K on a printer which fails at every turn and then i am charged through the nose to fix problem after problem.

I really loved my UM2 for the first few weeks....but this is a joke.

However can you explain how i unplug the old sensor and plug the new one in ?

Please indicate what country you are in -- in your profile settings.

To unplug it under the machine? Did you remove the cover? Just 2 screws. ALL screws on the entire printer use a 2mm hex so you should get one like this as I use it every day: 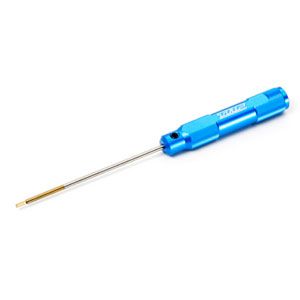 I guess I don't understand the question. Maybe you mean in the print head? Under the machine you remove the cover over the board (just 2 screws) then if you are an expert you just pull out the old connector and push in the new connector. But I recommend you remove the 4 screws and tilt the board so you can see what you are doing. I posted this up above with more details.

It's all so obvious I must be missing something.

And I'll re-iterate, don't unscrew the four screws that hold the board in place. It's not worth the headache and you can see perfectly clearly without doing so. There's a small little tab that should be pushed aside to release the connector. Same idea as on a network cable only in this case the tab is moved away from the connector instead of towards it. It's super obvious once you have things apart.

Nope you guys have both been great and clear in your reply.  It was the 2mm Hex tool i was seeking..

Thanks alot i'm off to print an a new hand for some kid in need!  (hopefully!)

Please indicate what country you are in -- in your profile settings.

Thanks again for the help.

May i ask why my location is important? I move reguarly and could be anywhere from week to week from NYC to Colombia (SA) London or Sydney Australia. Which one would you prefer?

Wow. Okay - good to know. Can you put all 4 countries in your profile somehow? It matters for many reasons. If you bought your printer in USA you get different customer service. If in Sweden you probably get IRobertI above. And so on. If you want parts and you want delivered to USA they come from fbrc8.com in Memphis and so on. When I say things like "cut off 15cm of filament" I use inches for UK/America people. When people want to buy blue tape the stores are completely different in Japan than in UK or USA and so on. People in USA call Isopropyl alcohol "rubbing alcohol". Digikey is great in USA but useless everywhere else. And the list goes on.

So that you never have to deal with taking the head apart again you might want to get an Olsson block (delivered to NY only) from my store gr5.org/store. It makes it easy to swap a nozzle. I do it all the time now. About 1 minute to swap nozzle and re-level. Makes it easier to unclog the nozzle. Hopefully I will have i2k's again within a few weeks also - extends the life of your teflon isolator.

I know it is an old thread, but I just bought Olsson Block and my UM2 is dead, couse of PT100B is damaged - I couldn't remove it. Now it is in 3 parts:/ (last one was drilled out).

Printer is obviously out of warranty. Have you checked some PT100B sensors from 3rd parties? It is quite expensive.

The ones from 3dsolex.com are excellent quality and good price.

If anyone else needs to take out their temp sensor - it's very tricky but I know someone who removed 100 and only damaged one. The technique I use involves a sewing needle, WD40, and heat. They can be very difficult to get out without damaging. But never ever pull them out by the wire.

My was pushed way too far, and I haven't any metal piece uncovered. I've tried to twist, to heat and use some vibrations. Unfortunately it didn't work:/ I'll try 3dsolex

The technique I use involves a sewing needle, WD40, and heat.

I'd be interested in learning more about this technique.

I have only done maybe 8. I haven't done one in a few months. It's almost always difficult. I take things apart until I realize I can't get temp sensor out. Then I squirt some WD-40 into where the temp sensor is - basically where the wires come out of the block.

Then I try taking a large/strong sewing needle and kind of try to pry it out. The brass is almost as weak as butter - it gets chipped away as I do this - I get the needle between the brass and the sensor (inside the hole) and pry. This bends the tip of the needle but I just keep going - try opposite side of hole.

Sometimes it seems like nothing is happening and a minute later it's slid out enough to grab 1mm of temp sensor using pliers. If no progress in 2 minutes then I heat.

I forget if I go to 180C or even hotter. Wait till the WD-40 stuff is "steaming". Then repeat but hold the block with pliers. BE VERY CAREFUL - if temp sensor or heater slips out the heater will quickly enter a run-away condition of full power. Turn off printer power immediately. You only have a few seconds (maybe 5 or 10?) before it heater will be glowing at 600C (that's if heater slides out -- if sensor slides out then you have much more time maybe a minute to cut power)

Once you get pliers on it start with a rotating motion - hold sensor still (not by wires) and rotate the block. Slide out at the same time.