How does "make overhang printable" work?

Hello! I am looking to understand how the "make overhang printable" feature works in Cura.

Poorly 😉 (I'm still convinced that the function shouldn't be in Cura, and it causes a lot of bugreports from people that enable it without knowing what it does). I obviously don't know what you are using it for, but is this really what you need?

Cura goes into 2D as fast as possible by slicing. From that point on it pretty much does everything on 2d polygons. So almost all operations that we do are subtracting polygons from other polygons and inset & offset them.

I obviously don't know what you are using it for

I enjoy the feature. Sometimes, when I am printing without supports (designed that way) there may be times that I have inadvertently put an angle here or there that would create an issue when printing. The 'make overhang printable' lets me turn that on without ruining the whole print as well as means I do not have to go back into sculpting the piece. I would say that it has to do more with artistic prints than engineering though.

Shape before slicing. You can see the hollows in the scooped areas. 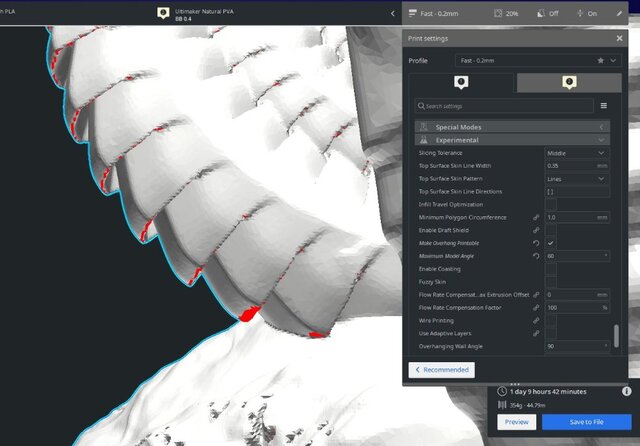 Overhang Printable on. You can see where it filled in the scoops to prevent printing in air. It did this without destroying the model. For me, it is a way to compensate for some really strange model properties when I do strange modeling or severe undercuts. I can see where this would be an issue with engineering and would no9t make sense, but for artistic things, it has a use. Came in very handy with the 'weird critters' I was modeling.

But, there do not seem to be many artistic type of modeling as compared to engineering type stuff. If it were to be deleted, I would weep a bit (Seriously, there could be actual tears 🤪 )...but it would not be the end of the world.

Poorly 😉 (I'm still convinced that the function shouldn't be in Cura, and it causes a lot of bugreports from people that enable it without knowing what it does)

Ummmm, is that not the case for any person just using things without understanding the feature?

Darned edit feature will not let me remover this final image. I go in, I hit delete and then save and it is right back where it is not supposed to be. It's good to have that explanation @kmanstudios.  From the engineering side:

This is a horizontal pocket for a hex nut.  "Make Overhangs Printable" is turned off. This is the same pocket with "Make Overhangs Printable" turned on: It does indeed make the overhang printable without support.  On the other hand, the nut won't fit in the pocket and the screw will no longer fit through the hole.  I don't see a bug here since it definitely made the overhang printable.  As @nallath notes (and @gr5 has also) it does create a lot of confusion.  There was so much confusion that I had suggested the tooltip be changed to "Do Not Touch" but after the explanation I'll go with "Do Not Touch Unless You Know What You're Doing".

I'll go with "Do Not Touch Unless You Know What You're Doing".

The obvious caveat though is, "Do people not check their slice to see what is happening. It is not like it is guess work really.

On the other hand, the nut won't fit in the pocket and the screw will no longer fit through the hole.

Exactly 🙂 That's proof of why I do not think this has engineering purposes. But for artistic, non-functional printing, it is a fun, helpful oddity in slicing.

But, seriously, check the slice before any printing, no matter what is being prepped for printing.

I think they look at it.  I don't think they understand what they're looking at.  Then they show up here.

I think your two examples best sum up what to look for visually. You can see the pocket and hole clearly and then completely fubar in the other view.

I also wonder what people are doing when they go into the 'experimental section' and just click. I know why I did it, but cannot assume for others.

I do remember early on how I had to learn this: Slice, see, make change, slice, then see change again. Repeat until things look right. I also remember clicking on 'close holes' on an inset circular design and it just capped everything into a cylinder. It did not make sense to me since the object was manifold and it was just closing up all the interior detail. Flummoxed me to no end and I came here to find out what happened.

So, yeah, I get the disconnect sometimes. Especially if you are a noob.

The make overhangs printable is one of those settings that causes a singificant part of the issues that we get on github (people enable it, forget about it, then see weird results). I don't know why it's that setting or why they even chose to enable it in the first place.