Right mouse button? Or is this where I make that old and dusty Mac mouse joke?

Robert, I guess it is... is there an alternative?

Are you just trolling Daid?

Okay, just send me a DM when the mocking has stopped and a serious answer was posted

Honestly I didn't think anyone was still using a one button mouse these days. Hence the "old and dusty" comment. Can't really help you then I'm afraid as Macs aren't my thing. This is what the manual says, so unless you can figure out a way to simulate a right click on your one button mouse I guess you're SOL.

I'm not using a one button mouse. My mac has a trackpad with can do a right mouse click.

Either way, it isn't working for Cura. I know I'm right clicking as I can open context menus everywhere etc. You simply don't need a lot of right clicks on a Mac so perhaps it's linked to something else?

Frankly, I've stepped over from windows about 5 years ago (at which time I was making all the same jokes to mac users) but after about 3 days I decided to never go back again and got rid of all my windows devices. Just sayin'

I use one of those power macs running windows. I like the steel cases and appreciate the hardware design. The OS drives me nuts though, I'm sure the opposite is true for mac users.

You can use the arrow keys to rotate. it's not the smoothest solution like a mouse scroll, but it works.

I am somewhat confused, now. I read here, the platform is rotating with right mouse click? But actually the right mouse button must be held down and the mouse movement is the rotation of the platform, right?

Hmm, a beer today, and for a long time, the first, presumably it was bad. It is time for me to sleep... :wacko:

Yeah it is indeed, but to no avail. I'll try to connect an external mouse and see if that makes a difference.

Although I really don't plan on using that for anything else, the mouse is heavily limited in functionality compared to a trackpad (no multi finger gestures and so on).

Rotating with the arrow keys does work indeed, unfortunately the up/down are defined as zoom keys instead of rotating in Z direction. So left and right only allow me to rotate the XY plane. Ow well.

How do you even "hold" a button down and drag at the same time with a mouse pad? That's what you need to do.

Anyway on a mac "ctrl" while clicking is the same as right mouse button on a PC. So if you can hold down CTRL key while you click and drag does that work? Also try arrow keys as suggested above.

Control results in moving the workspace, the same as double finger drag.

Scrolling (double finger up and down or left/right) is zoom.

Left button drag does nothing, except when the object is dragged, then it is moved around.

The only rotational response so far are left and right arrow keys and fn+arrow keys to change the view.

Changing the camera in height or in terms of Z is something I haven't found yet.

The only way to avoid such jokes is not to have a Mac...

Sorry, your remark was kind of an invitation... :lol:

Control results in moving the workspace, the same as double finger drag.

That's shift+right drag for me.

Changing the camera in height or in terms of Z is something I haven't found yet.

I rotate to look down, then zoom in, then rotate back. But - you can't rotate - so out of luck.

Well I don't have a scroll wheel so I can't zoom easily in many many cad packages. Worse, I don't have a third "middle mouse" and all my favorite cad software wants that. I might go out and buy one and use that mouse just for DesignSparkMechanical.

Can't you just double finger drag? I've configured that as scroll and it works everywhere.

I get pain in my arms if I use a normal mouse. I can only use track balls. My mouse looks like this: That was not meant as making fun but as a serious question. If you're on a mac, the double finger drag is a possibility no? If your trackpad is too old and doesn't support multi finger gestures (or you actually don't have one), why not buy their bluetooth one:

It really is pretty awesome.

Fyi, I've had to stop using mouses after a couple years on a windows pc because of pain in my arm and shoulder. The last 10 years or so on windows I've very happily used one of these: 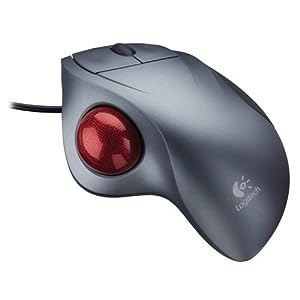 So I really know where you are coming from. To be honest, since I've been using the apple trackpads I haven't had a single problem pain-wise.

I'm on a new MacBook with Cura 14.07. I even tried plugging in a MX518 Logitech mouse with the up-to-date drivers. Holding down the right mouse button and dragging just pans.

There is no way to rotate.

Is there a tool for the Logitech drivers on the Mac as there is on Windows machines? Such a tool might allow you to configure the buttons of your mouse.

So IMO it's not something that needs to be configured at the "mouse end" but probably Cura related. I've annoyed Daid via DM in the hopes he can/will clear some stuff up here

I'm on a new MacBook with Cura 14.07. I even tried plugging in a MX518 Logitech mouse with the up-to-date drivers. Holding down the right mouse button and dragging just pans.

There is no way to rotate.

It's a very annoying bug in the library I'm using. Sometimes the shift-key is detected as "always down" causing a few different effects, including panning instead of rotating. It also causes up/down to be zoom instead of look up/down with the cursor keys.

Now, for the right-click-rotate not working on the touchpads. No clue. Most likely some weird ass MacOS shit again. For something that should have "same software & same hardware" almost everywhere, I get lots and lots of odd bugs. While I have way less of those on windows.

Next time you get the option to buy Mac or a real computer. Think of me. And think how much trouble you are causing me by choosing Mac.

Sigh, okay so a mac is not a real computer. Great.

(I think Daid's aversion has less to do with the machine itself as how Apple treats developers... :rolleyes: )

Just imagine you - who is using windows I assume - (or any other windows user for that matter) ask a question on any forum out there and people start throwing all these remarks at you.

Am I, because I happen to prefer MacOS above Windows (which I've used for 10+ years) somehow asking people to mock me for my hardware choices?

Are mac users, because they are a minority, somehow worth less?

Can you as a company - if you release a mac compatible product - hide behind a "a mac is not a computer, so what do you expect" excuse if it doesn't really work?

I'm really so tired of always the same reactions. I have never seen mac users dis windows users on forums, just because they ask a question about something that doesn't work. "Ow, of course, you are on windows, what else did you expect?"

I like my Mac and I consciously threw out my windows PCs because I really prefer the mac. So what?

It's not anyones right to judge me for that.

And I know how hard it is to interpret the tone behind text sometimes, so I want to clarify that I don't mean to step on any toes here. So really all I'm asking is that everyone just thinks for 2 seconds before they post something like that.

I doubt anyone really means anything serious by it. My initial post for example wasn't actually meant as mockery or a joke, I honestly didn't realise it was still an issue. In daid's case I'm sure that it was just a bit of frustration that needed to be vented. As a web-dev I'm sure you have more than a couple of "nice" words to say about IE for example

Let's put this whole mess behind us and move forward