By studioAdhoc,
November 5, 2018 in Improve your 3D prints

The printer acts as if it was an UM3 not Extended, but it is…

Your printer has an identity crisis...?

- the question is... why? Did it got a new mainboard recently?

This topic may help:

Hi @tinkergnome, thank you for the quick answer!

There is no obvious reason that could explain this identity crisis but few months of sleeping in a dark place… Every part comes from the original brand new box.

The topic seems to talk about the same issue and I'm excited about trying @Daid 's solution :

But I don't know how to send this command line to the printer… Is there a console on Cura ? Or do I have to install Python 3 ?

I would first try a factory reset as you will have to put your UM3EXT into developer mode and log in for the procedure described above.

If you want to do this, you have to connect with an ssh client to the printer.

In developer mode you can access, delete and change any file on the printer. That means you can completely mess up your device - so be very careful. If you have no clue what ssh is or how a linux system works... you should better ask your reseller for assistance - give him/her the link from the topic that is mentioned above (better safe than sorry...)

As a minimum for the DIY approach: read the first paragraphs of this topic about "developer mode" and "what does it do" before you start:

what is the output for the "Hardware type ID", if you scroll down on this screen? 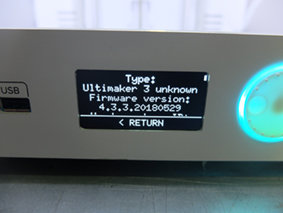 Okay, I think I understood what I have to do but I'm not really used to this kind of tricky business.

Without instructions for Windows, I think I won't be able to solve this by my own…

I have no idea of how I could connect to the ssh server.

@tinkergnome the Hardware Type ID is 0, it must be related to the "unknown" type of the printer.

Authorized resellers from your country should be able to configure it for you, or can provide you with detailed instructions.

Hi, I asked a friend with more skills than me for some help ✊

He acceed to the ssh server of the printer, logged in with ROOT and tried to launch Daid's command (seen above) to set the Hardware type ID to "9511".

an error occured, with this message (last line) :

So the connection timed out, apparently…

We were so close… and we can't figure out why did it happen.

Your friend can check, if this "file" exists on the printer, but to me it looks more and more like a hardware error of the Olimex board?

We looked for EEPROM feedback and had no response...

It seem that you're right, Olimex board or the EEPROM chip must be damaged.

I hope the machine's warranty is still working !

A Build Plate height issue can be caused by an "identity crisis" from the printer, that's to say the machine doesn't know what type of hardware it is. Our conclusion (so far and in this particular case) is that this identity crisis itself is caused by a hardware damage on the Olimex board, concerning the EEPROM chip.

Thanks a lot for your help !

I hope this printer will survive ✊

How did this get resolved?

Note that if you have upgraded your printer - this might not work anymore.  It seems that newer versions of UM3 and S5 firmware don't have the /ulti_installer/ folder anymore.

More details in this thread: