Curious to see what you come up with!

I thought about making my own nozzles with other diameters than .4 for faster or more accurate prints.

Cannot order it from there website, I really want this stuff!!!

Was there a typo in the description, or will there also be a 3mm 'fine' filament that works with .4mm nozzles?

These filaments are more likely to clog than normal PLA so they are telling you the minimum nozzle size is .4mm. Most people suggest going even larger - say .65mm. This is because there are particles of wood mixed in.

The most common filaments by far are 1.75mm and 3mm (although 3mm is actually 2.85mm normally as 3mm would probably get stuck in the bowden feeder tube). Any PLA that is sold in one of those sizes is usually sold in the other size as well.

Saw it 3 day's ago appearing in there webshop, going to order one!

I got myself a sample of this at the 3d PrintShow in London so I'm looking forward to trying it. I'm just using my 0.4mm nozzle though.

I like the LayWoo-d3 and have printed a few things with that, so this will be an interesting comparison. I wonder if ColorFabb will work on a printable sandstone filament next?

sorry guys i havent got around to testing this... i have been crazy busy 3d printing chocolate moulds for a christmas family project... Should be testing the new colorfabb wood fill tonight :-)

I am also wanting to use this after seeing it at the London print show at the weekend,

I spoke to sander at the show to get his views on using it with a ultimaker 2 and the .4 nozzle whether he thought it would clog. He had just setup one of the UM2's and was printing with it and it looked ok, i did not stick around to see the print finish..

Perhaps when sanders comes back he can update us on the results....

The UM2 that was printing this at the London 3d Print show clogged while I was there... I didn't see how easy it was to rectify the issue. My experience with LayWoo-d3 is that it clogs easily if you have the temp too high and/or print too slowly so that there isn't enough flow... but clogs are easy to clear with a thin stiff wire. I'm going to try the wood filament from ColorFabb next week with UM2. I'll write here when I'll try it !

I got my hands on some samples of the woodfill fine last weekend. I tried it out on the UM and a few of my other machines. The fine can run with a stock nozzle. I REALLY like this material.

The surface finish just looks really cool. The grain of the fill hides the printing lines. It also does quite impressively in bridging even without a cooling fan.

I also have some of the coarse, but don't have a spare nozzle. If anyone in the US is up for going in on a group buy with me for some nozzles to split up the shipping, I can drill yours out for you and send you a little bit of my sample of the coarse.

Printed some tonight that I got with my order of Colorfabb XT from PrintedSolid (Thanks!)

It was looking absolutely incredible, but then clogged after about two hours of printing; a hard stop of extrusion. It was easy to clean out, but I suspect it would happen again. Settings were 0.1mm layers, 40mm/s speed, 227°, 2.54mm stated filament diameter, flow turned down to 86% to get perfect extrusion.

Do I love the print quality? Yes. Do I want to use a large nozzle every time I want to print in this material? Probably not. Would I buy a spool of it if it were guaranteed to be filtered multiple times through a 0.4mm mesh? Absolutely.

bah! I forgot to subscribe to this topic and didn't realize anyone had replied :(

Oh well. I have 4 nozzles on the way, but will check in with Illuminarti to see what he has going on as well

Going to be trying things with the larger nozzle once they arrive and will report back.

was doing a test print with colorfabbs woodfill fine pla.

Had a nice old train station building i always wanted to print.

ultimaker1 printed perfect for 4 hours... zero problem and the print lookes so so beautiful :smile: ... kissed the printer good night and wished it well.

Woke up this morning and found the print head still happily printing.. just nothing coming out of the nozzle :sad:

Two things.. nozzle was totally jammed. found lots of black tar gue dribbled over my half completed model... also what is interesting.. found a small pile of pla dust piled up on the table under neath the extruder gear.

(1) flow was too much.. a build up of pressure and that got it grinding and maybe grinded the pla down in the extruder... haven't checked that yet.

(2) or... woodfill just does not work with the standard .8mm nozzle ?? the pla got a little more rough in consistence

(3) i turned off all the other electronics just as i left the room and it seems like the printer blocked about 10 seconds after me leaving the print alone..

mmmmmmm..... i want to print something beautiful with this amazing colorfabb woodfill pla... the texture and no bending or curving is just sex on the beach for me ... :smile: :smile:

here is a quick iphone photo of my colorfabb print from last night.

i dont care if i block 10 nozzles.. i am going to learn to print with this stuff because it is... BLOODY BRILLIANT :-)

just the feeling of having a detailed model that had no bending or tweisting on the bases and feels like it was hand made by a old toy maker... how cool is that !!!

woodfill PLA.... you might have won the battle !! but you havent won the war !! 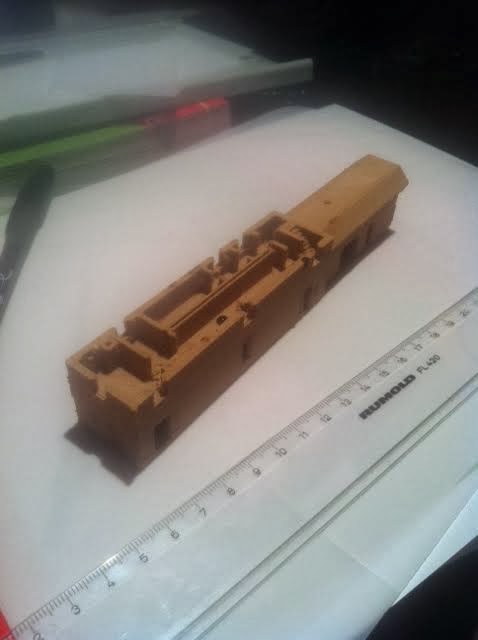 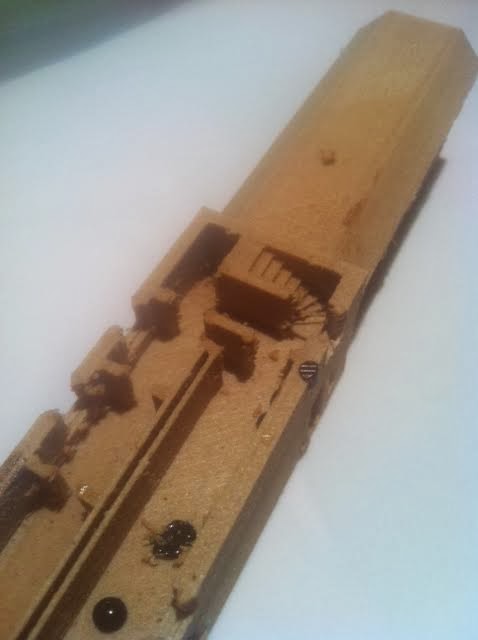 How does it smell??

How does it smell??

Anyway, Ian - glad you're going to figure this material out. Please post your secrets when you do. I agree that it is the best looking and feeling material I've ever printed with.

Retraction was used the top 2 cm for printing the bore holes. Extrusion seems to become a little uneven then.

woodfill PLA.... you might have won the battle !! but you havent won the war !!

Hi Ian, good that you're not giving up on woodFill

So let me share some of the things I've discovered about printing with woodFill fine over the last few weeks.

Since a week or so we have a Makerbot Replicator 2 (the PLA machine) and I've been making custom profiles for woodFill. I discovered that woodFill fine seems to print a lot more reliable when printing at rougher layerheights. The my profile for the Makerbot is based on 0.27 mm layerheight, printing at 190C at speeds of about 80 mm/s.

I've been using the same trick for all the Ultimakers, original and Ultimaker 2. Printing at 195-205 C at 0.27 mm layerheight sliced at standard 50mm/s, but usually during a print increased the speed to about 125-150%.

I think the rougher layerheights work better because the fillament isn't staying to long in the hot-zone of the print head. When you're trying to print with 0.1mm layerheight and do not increase the speed the filament will move a lot slower through the hot-zone, which might cause some problems with woodFill.

So my number one tip would be to start at rougher layerheights, such as 0.27mm, find the lowest possible extrusion temperature, 195-205 and try to print at speeds upwards of 50mm/s.

If you really need to print at lower layerheights then I think you should compensate with speed settings, to make sure the filament is still moving through the hot-zone at a decent speed.

Nice. I assume those wrinkles are in the STL? And that tiny hole is because the wrinkles got too close? I like the look of this material.

It will become the lower half of a LED table light. When printed with regular PLA I didn't like the flat surface, therefore the wrinkles . But with the woodfil filament I printed the flat version as well: 0.2 mm layers are invisible (considerably smoother than the first print with 0.15 mm layers).