I assume the star is separately printed inlay work?

Awesome stuff! How are you printing dual head?

@shurik: This is Photoshopped, isn't it?

Seriously: Perfect ears, perfect antennae, even the support for the hands... dual extrusion without any leakage... HOW?

Since I have no dual-color upgrade, each color was printed separately, including the David stars.

I t took quite a while to intersect them properly with the body and clean up all the mess. All that - in Sketshup which was constantly crashing due to the complexity of the mesh.

That robot was scaled up to double size, i.e. - 200%. At the original size, even the .25 nozzle couldn't deliver the required quality of the stars.

@shurik: There are smaller nozzles than .25mm

What a pity - no dual extrusion... nevertheless an excellent print!

would you mind sharing the files?

I'd love to give it a try

Sure, will load them up to somewhere probably tomorrow.

Sent you message with the link.

Ahh, Shurik, you got everyone excited and then let us down with a bump. Always loved the concept of 3D printing but until last year also knew/thought it was too early in the technologies evolution to produce solid and accurate working parts that also had some kind of durability attached... although with the ability to just keep on producing exactly the same part perhaps durability is not so important anyway.

So... could I 3D print a speargun which might compare even at the most basic performance levels... well I thought I'd give it a try.

Initial testing with PLA and ABS were encouraging but hardly successful... accuracy/shrinking/warping of prints was continual and hardly a new problem which seemed to doom my ambitious project to abject failure.

MK1 was a small and successfully tested speargun at the end of last year which hasn't yet caught any fish but that's besides the point... it was used 3 times and is still intact and has proved to be an extremely useful prototype.

MK2 is being printed right now...

To say I'm pleased so far halfway through the printing stage is an understatement... but the real 'working part' tests are still clearly yet to come!

Sent you message with the link.

I assembled the files and sliced with (new) Cura. Scaled to 200% and cheated with nozzle size (set to 0.25 while actually printing with 0.4 mm). As you had to design the stars to be inlays it's quite tricky to print the one on the front side. Very little to extrude but a lot of retractions, the same issues I suppose you had when printing it separately. Indeed, the front star was printed at 0.04 resolution, with .25 nozzle, and the first couple of trials were not very successful.

Can you see what this says? ... and his little brother

The youmagine robot, modified in a similar way but for dual extrusion. Can you see what this says? 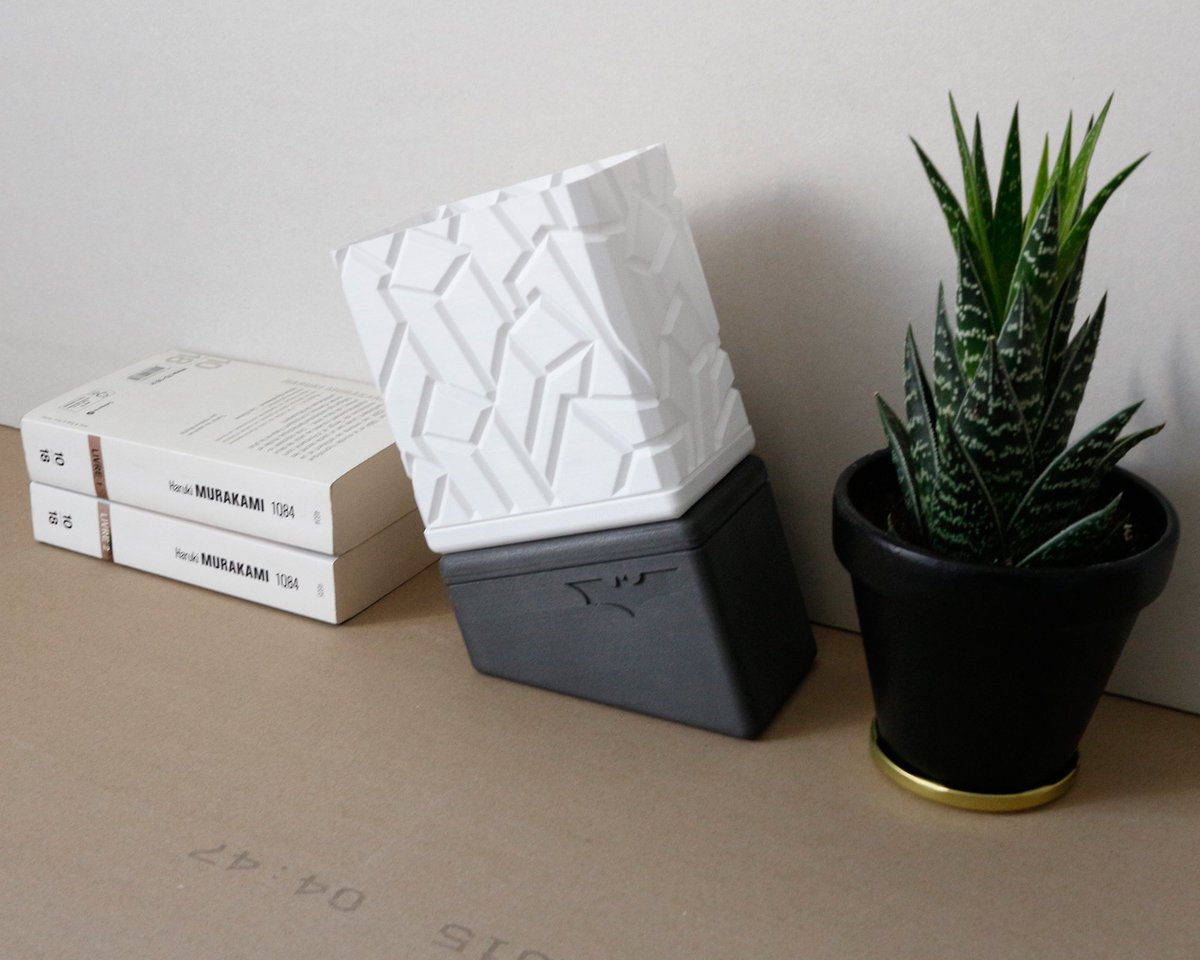 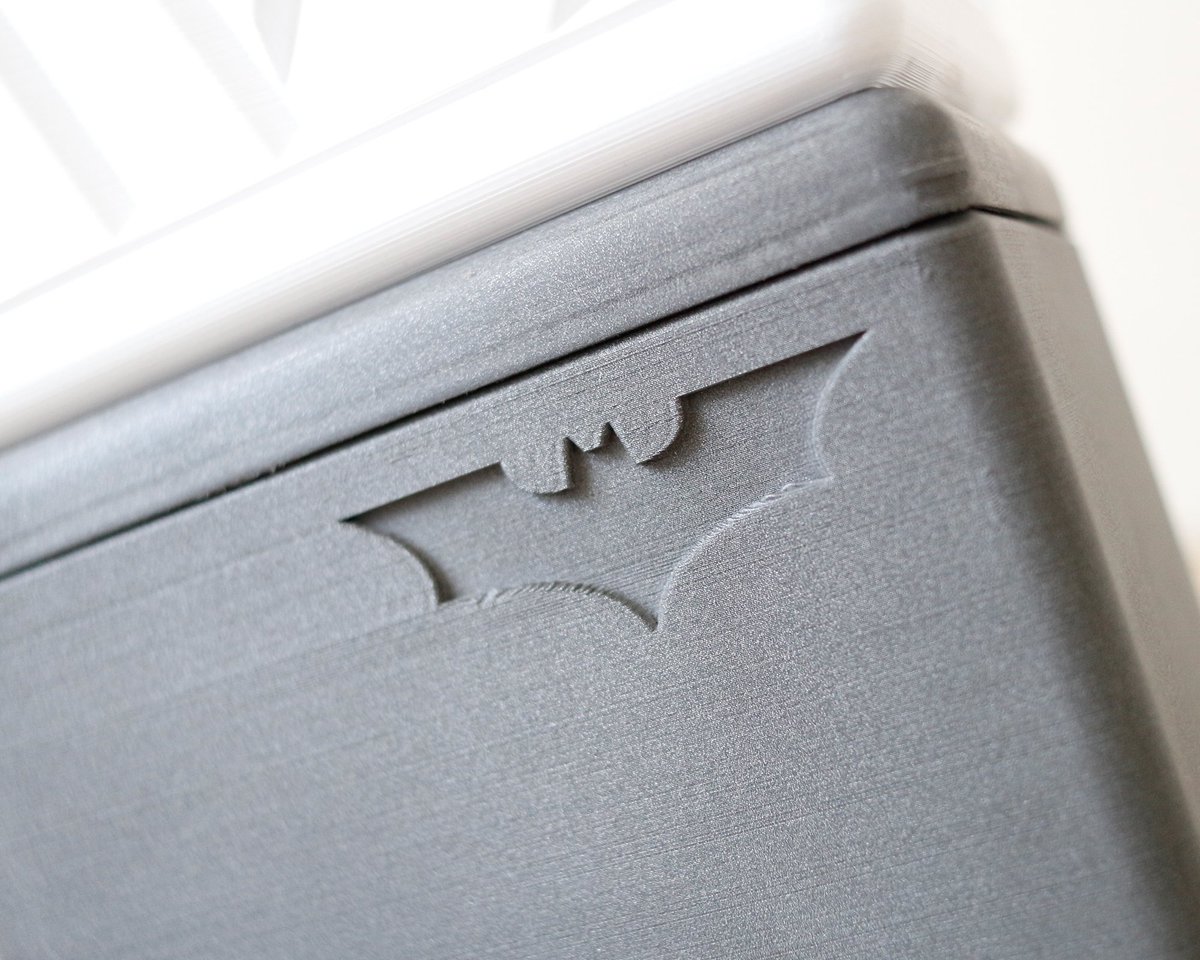 My latest design, a geek lamp. I printed the base with Proto Pasta and then slightly brushed it, really nice result. The lamp screen was a solid STL and with Cura I just printed it with one shell and no bottom/middle/top infill.

With the screen I had some problems because as the wall was only 0.4 thick it deformed due to contraction of the material, and it ended up being an ondulated surface. It all got fixed printing at the lowest temperature possible (190ºC in the UM2+).

... and his little brother

The youmagine robot, modified in a similar way but for dual extrusion.

Ahh, next time I'm in München, I have to see your printer!

Btw, you could do this as well.

Hhahahah! Funniest thing I've seen in a while, thanks for the laugh!

While my Ultimaker original, is not really original anymore I still like to show off

This is a large scale print of a statue I 3D scanned and printed, and still is a work in progress.

the total height is 60cm, and the largest printed part 38cm, the base is printed in 4 sections.

Looks very nice @Xeno!! Is it still WIP? Can't wait to see it when it is finished.

From a completely different angle, and even though I did not print it myself but 'team Ultimaker' did, I really want to share this print if it has gone unnoticed.

One of the most impressive print qualities I have seen in a while. Give it a try yourself, the settings are shared